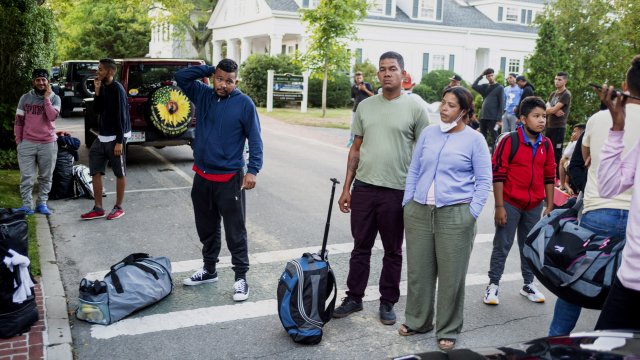 Attorneys say migrants were misled before they boarded flights to the wealthy Massachusetts island.

Attorneys say migrants were misled before they boarded flights to the wealthy Massachusetts island.

The controversy comes as Republican governors continue to transport migrants to Democratic-led states in protest of the Biden administration's policies at the southern border.

Migrants have told journalists and immigration attorneys they were singled out and recruited under false pretenses, and given promises of jobs, shelter and aid.

Those 48 asylum seekers, mostly from Venezuela, were looking for safety and security after fleeing a country in economic and political turmoil.

They arrived at the southwest border in Texas, were processed by federal immigration authorities and released. Some ended up at a shelter in San Antonio, where they informed their attorneys that a crew and a blond-haired woman in particular made promises to them that they could to another city, get shelter, a job and aid, all at no expense.

They were transported on a private jet, paid for by the State of Florida, which has apportioned money for immigrant removals in this year's budget.

When the news broke last week, the Florida governor took credit, giving the news first to conservative news outlets. DeSantis was eager to frame this as highlighting liberal hypocrisy on immigration. But as the story trickled out about the migrants arrived and who in effect recruited them, it caught the attention of local law enforcement in San Antonio.

"We want to know what what was what was promised to them," said Bexar County Sheriff Javier Salazar. "What, if anything, did they sign? Did they even understand the document that was put in front of them if they signed something? Or was this strictly a predatory measure, somebody coming and preying upon people that are here, minding their own business and are here legally, not bothering a soul, but somebody saw fit to come from another state, hunt them down, prey upon them, and then take advantage of their desperate situation just for the sake of political theater, just for the sake of making some sort of a statement and putting people's lives in danger?"

The migrants flown to Martha's Vineyard sued Gov. DeSantis and his transportation secretary Tuesday for engaging in a “fraudulent and discriminatory scheme” to relocate them.

The lawsuit, filed in federal court in Boston, alleges that the migrants were told they were going to Boston or Washington, “which was completely false," and were induced with perks such as $10 McDonald's gift certificates.