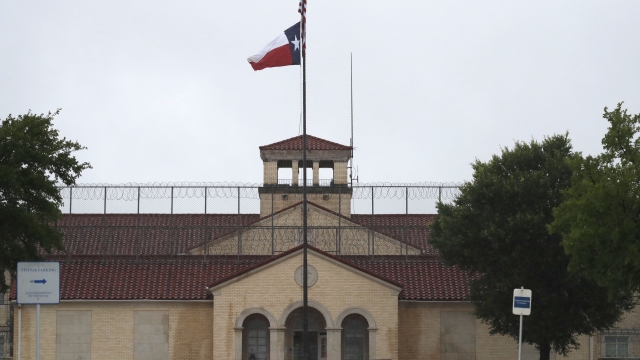 After 94 COVID-19 deaths in Texas prisons, critics are starting to question whether neglect is as dangerous as the virus.

In Texas, COVID hospitalizations have jumped by more than a quarter over the past week, and some of the worst outbreaks in the state are concentrated in prisons and jails.

VILLARREAL: "It's just a scary feeling that he's worried about us out here. You know, and we're worried for him in there."

Adrianna Villarreal's father is being held at the Stiles Unit in Beaumont, Texas, which has the second-highest rate of active cases in the state. Villarreal says her dad tested positive for the virus and has been on lockdown for weeks.

VILLARREAL: "How are you not going to give him his medicine for four days because he's in quarantine? Because of the fact that y'all are low on staff? The staff is out because of COVID, or they don't want to go to work because of COVID. … And they're just kind of just left in the dust, you know, to fend for themselves like this."

Along with the Beaumont prison, there are major outbreaks in San Antonio and East Texas facilities, where active cases are at more than 490 and 780 cases, respectively.

With at least 94 inmate deaths confirmed to be COVID-related, the most of any state prison system in America, critics are starting to question whether neglect is as dangerous as the coronavirus.

BLAKINGER: "I'm not sure that I would categorize the response so much as one of confusion as much as sort of negligence."

Keri Blakinger from the Marshall Project has reported on several problems throughout the Texas prison system in connection with COVID-19 — from terrible food to dead bodies in prison cells.

BLAKINGER: "I think that the mood of the people I'm talking to is sort of varying degrees of desperate and terrified. … They've got no visits, they've got limited phone use, if any phone use. They've had no programs in many cases. They have been sitting in their cells 24 hours a day, not getting out. Haven't seen sunlight since March and have been living on these terrible, brown-bag meals that arrive at sort of random hours. And in some cases, they've been locked in alone. In some cases, they've been, you know, locked in with a cellmate. And this has been the condition for months during a pandemic."

The Texas Department of Criminal Justice started widespread testing in mid-May after 30 inmates with the virus died, including one man who was just 12 days away from completing a 20-year prison sentence.

Since March, the ACLU of Texas has been sending advocacy letters and has filed multiple lawsuits aimed at reducing the number of incarcerated people throughout the state.

KLOSTERBOER: "The No. 1 step is that you really have to reduce the population of these facilities. In so many places, social distancing is just completely impossible. Things like cleaning and sanitation and providing masks are all very helpful, but ultimately, if you have 100, 200, 300 people who are all using the same bathroom, the same sink, getting food in the same place, it's just impossible to prevent the spread of the disease."

But rather than take steps to reduce the number of people behind bars, Texas governor Greg Abbott signed an executive order limiting who could be released pre-trial from county jails.

As it stands, Texas has more total coronavirus cases amongst the state's prison population than anywhere else in the country — leaving family members of those prisoners feeling helpless.

VILLARREAL: "We care about my dad very much. I love him. You know, I would hate for something bad to happen to him in there."