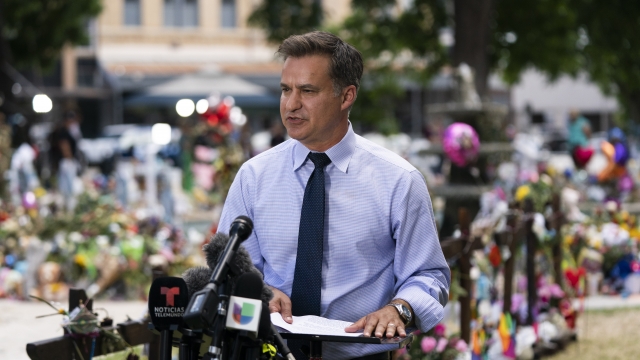 "There was error at every level, including the legislative level. Greg Abbott has plenty of blame in all of this," Senator Gutierrez said.

The commander overseeing police during a shooting at an elementary school in Uvalde, Texas, was not informed of panicked 911 calls coming from students trapped inside and it's unclear who at the scene was aware of the calls as the massacre unfolded, a Texas state senator said Thursday.

Sen. Roland Gutierrez said it was a "system failure" that school district police Chief Pete Arredondo received no word of the pleas for help from people inside Robb Elementary Schoo l on May 24.

"I want to know specifically who was receiving the 911 calls," Gutierrez said during a news conference.

His voice often cracking with emotion, the Democrat who represents Uvalde said no single person or entity was fully to blame for the massacre. But, Gutierrez said, Republican Gov. Greg Abbot should accept some of the responsibility for failures in the police response.

"There was error at every level, including the legislative level. Greg Abbott has plenty of blame in all of this," Gutierrez said.

Nineteen children and two teachers died in the attack at Robb Elementary School, the deadliest school shooting in nearly a decade. Seventeen more were injured. Funerals for those slain began this week.

Earlier this week, Abbott ordered the state to conduct in-person school district security audits and asked top lawmakers to convene a legislative committee to make recommendations on school and firearm safety, mental health and other issues.

The next Texas legislative session is scheduled for January 2023. Gutierrez is among several lawmakers who have urged Abbott, who is running for reelection, to call a special session in response to the shooting.

On Thursday, the governor also directed the state education agency to estimate how much new school safety measures would cost, have schools inspect exterior doors weekly, and "develop strategies to encourage school districts to increase the presence of trained law enforcement officers and school marshals on campuses."

Many districts, including Uvalde's, have dedicated police forces and Texas created the state School Marshall Program in 2013 to train teachers and school staff how to react in the case of a shooter, even carrying guns and firing back. In 2019, Texas lifted a cap on the number of school marshals per campus.

The suspect in Uvalde spent roughly 80 minutes inside the school, and more than an hour passed from when the first officers followed him into the building and when he was killed by law enforcement, according to an official timeline.

Since the shooting, law enforcement and state officials have struggled to present an accurate timeline and details of the event and how police responded, sometimes providing conflicting information or withdrawing some statements hours later. State police have said some accounts were preliminary and may change as more witnesses are interviewed.

Much of the focus turned to Arredondo in recent days after Steven McCraw, the head of the Texas Department of Public Safety, said the chief believed the active shooting had turned into a hostage situation, and that he made the "wrong decision" to not order officers to breach the classroom as 911 calls were being made to the outside.

Gutierrez said it's unclear if any details from the 911 calls were being shared with law enforcement officers from multiple agencies on the scene.

But, the senator said, the Commission on State Emergency Communications told him the school district police chief did not know. Officials at the commission have not responded to a telephone message seeking comment.

"He's the incident commander. He did not receive (the) 911 calls," Gutierrez said.

Arredondo has not responded to interview requests from The Associated Press since the attack. A telephone message left at the school police headquarters on Thursday was not returned.

Since Wednesday, the Department of Public Safety has referred all questions about the investigation to the Uvalde-area district attorney, Christina Mitchell Busbee. She did not immediately respond to voicemail and text messages on Thursday.

There have been communication breakdowns during other mass shootings in Texas, and experts say smaller, regional dispatch centers are often inundated with calls during a major emergency.

Police communications were a problem in 2019 when a gunman shot and killed seven people and wounded more than two dozen during a rampage in Odessa, Texas. Authorities said 36-year-old Seth Aaron Ator called 911 before and after the shootings but a failure in communication between agencies — they were not all operating on the same radio channel — slowed the response. Ator was able to cover some 10 miles before officers shot and killed him. Fritz Reber, a 27-year veteran and former captain with the Chula Vista Police Department who has studied 911 dispatch systems, said a 911 center typically relays information from callers in writing to a dispatcher, who passes it along to officers in the field over the radio. The process can be slow.

"If you listen to all the 911 calls contemporaneous to all the radio traffic, it will be shocking when someone calls 911 how long it takes for that same information to come out over the radio and how different it is than listening to the call," Reber said.