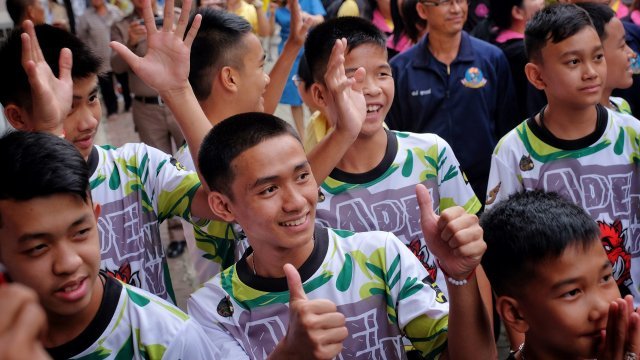 The 12 boys and their soccer coach were released from the hospital Wednesday.

The 12 Thai boys and their soccer coach who were rescued from a cave last week were released from the hospital and made their first public appearance Wednesday.

Before sharing their experience in the cave at a press conference, the boys got soccer balls and kicked them around to show how healthy they are.

The boys said that they didn't bring food into the cave with them because it wasn't supposed to be a long adventure.

When they tried leaving, their way out was flooded.

Then, they tried going deeper into the cave, thinking there might be another way out — which is when they got stuck in the flooded tunnels.

Ten days later, they heard someone speaking English, and one of the boys went to investigate. That's where he found the British divers who were a part of the search-and-rescue mission.

During the press conference, some of the boys apologized to their parents and honored the memory of the retired Thai Navy SEAL who died during the rescue effort.

The team said through it all, the biggest lesson they learned was to "not live life carelessly."

ABC News reports that most of the boys said when they grow up, they want to be professional soccer players and Thai Navy SEALS.