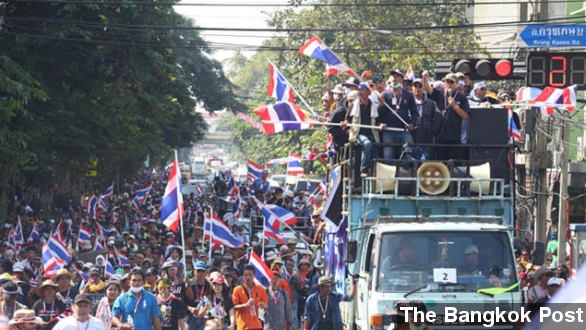 Which is why the tens of thousands of protesters on the streets of Bangkok haven’t let up. They want Yingluck’s resignation. (Via RT)

Closely aligned with the protesters is Thailand’s main opposition Democrat Party. It announced Sunday its members were resigning from the Parliament to protest a government they see as illegitimate. (Via Arirang)

They say Yingluck is merely a puppet for her brother, former Prime Minister Thaksin Shinawatra. While he’s now living in self-imposed exile in Dubai to avoid corruption charges, some observers say he’s still pulling the strings in Bangkok — a charge his sister, Yingluck, denies. (Via U.S. Department of Defense)

She says she’ll remain interim prime minister until the proposed new elections are held in February, though some analysts say it's unlikely the move will satisfy her critics.

“That’s two months. The worry is what happens in the interim period. People are not happy on the streets there, and the fear is that this could very likely end in violence.” (Via CNN)

“Nobody here believes an election will actually solve the issue, and for all the numbers you can see, and these numbers are amazing, remember none of the government’s considerable support is represented here.” ​(Via BBC)

The Wall Street Journal reports it’s unclear if the opposition will take part in the elections, pointing out Yingluck is projected to win anyway, due to her party’s support in Thailand’s countryside.

Instead, the Democrat Party wants an unelected council to replace parliament, which as a writer at the Los Angeles Times notes, is “a possible indication they lack the votes.”

Since the upheaval began in November, at least five people have died and more than 250 have been injured.