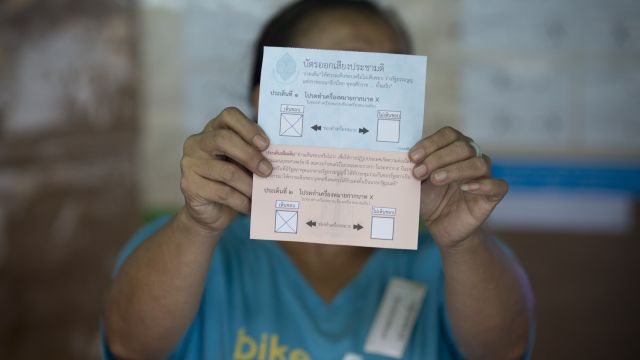 Thailand's new constitution secures the military's influence on the country.

After two years of military rule, voters in Thailand have adopted a new constitution for a civilian government — which isn't to say the military is going to just hand over power.

The new constitution, which was supported by about 60 percent of voters, expands the military's control over the country's legislature, the National Assembly. It lets military officials appoint every member of the Assembly's upper house, the Senate. Rule changes will also make it tougher for any one party to win a majority in the lower house.

SEE MORE: Thailand Military's Not-Coup Is A Coup, After All

Supporters of the constitution argue it will help stem political corruption in the country: Thailand's previous prime ministers were both removed after facing corruption and abuse of power charges. Formal resistance to the constitution was stifled by the military, which prosecuted critics and suppressed negative media coverage.

With the constitution approved, Thailand can expect to have a general election by the end of next year. And if a second measure on the constitution ballot is approved, the country's military-appointed Senate will play a significant role in choosing the next president.