That Time Brokaw's Phone Went Off During Election Coverage 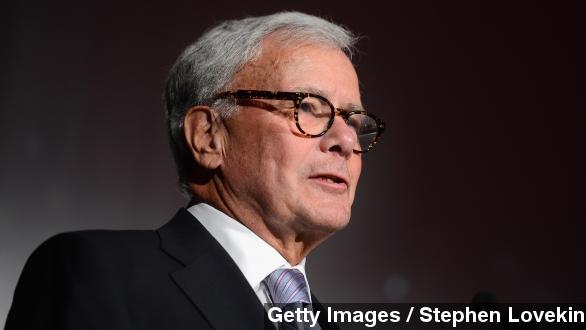 Tom Brokaw's phone went off Tuesday night while he was covering midterm election results on MSNBC. He then pretended it was his wife calling him.

The midterm elections have led newscasts since Tuesday evening. And all the reporters had their game faces on when it came to reporting the results.

But it's a humorous moment that happened during the election coverage — and had nothing to do with politics itself — that's been making headlines.

TOM BROKAW FOR MSNBC: "Could that be me?"

RACHEL MADDOW: "No, it's not you. It's something ambient."

BROKAW: "I'm afraid it is. Unfortunately. ... I will remember to bring home the milk, and I'll feed the dog in the morning. Just sleep in. It's going to be OK."

Yep, that was MSNBC's Tom Brokaw pretending to talk to his wife after his phone's alarm went off.

And Wednesday morning, the NBC anchors analyzed what was truly important about that moment.

SAVANNAH GUTHRIE: "I've always wondered who picks that alarm ring. It's the most annoying ring in the world."

AL ROKER: "I actually used it until Deborah said, 'That's it.'"

So there are at least two people in the world who have used it: Al Roker and Tom Brokaw. Everyone else out there, maybe it's a good idea to just stay away from the ring tone that sounds like a fire alarm.