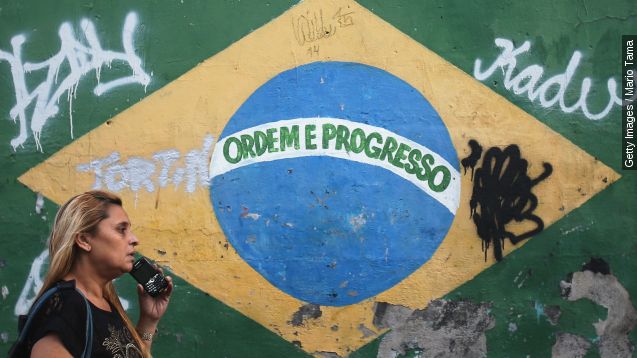 Brazil's economy is in the tank, and it looks like the 2016 Olympic Games in Rio de Janiero are only adding to its issues.

Brazil's economy is a hot mess. The president's approval rating is at a record low, the government is caught in the middle of a huge corruption scandal, the nation's currency is tanking and unemployment is at a six-year high.

And yet, ready or not, in eight short months, thousands of athletes and spectators will descend on the country's second-largest city for the 2016 Olympic Games.

Back in 2009, when the city got the bid for the games, the economy looked a lot more stable. A different president was in charge, the currency was appreciating against the dollar and interest rates were down. Add in landing the bid for the 2014 World Cup and the 2016 Olympic Games and no wonder people were dancing on the beach. (Video via Al Jazeera)

Fast-forward six years and organizers announced Thursday they're already $520 million over budget for next summer's games. And somehow that translates to athletes being forced to pay for their own air conditioning.

A spokesman for the games said, "The goal here is to organize games without public funding and to organize games that make sense from an economic point of view. ... [It] hasn't been painful so far. It will be painful from now on, because we need to finish the process."

So see ya, air conditioning; peace out, fancy food; and too bad for 500 paid staff members who, turns out, won't be hired.

But if Brazil can just tough it out, a major payday is on the way, right? Probably not. There are lots of horror stories about host countries overspending and failing to bring in much revenue. (Video via NBC Sports)

Determining how the games impact a country's economy is much more than just looking at money spent and money made. There are multiple factors at play, like how well new infrastructure pays off in the long run and how likely it is for the games to bring new business to town.

An economist at the University of South Florida told The New York Times, "The bottom line is, every time we've looked — dozens of scholars, dozens of times — we find no real change in economic activity." He continued to say hosting the Olympics is "like a wedding. It won't make you rich, but it may make you happy."

Looks like Brazilians will have to ride out the rest of this economic turmoil sans the light at the end of the Olympic Games tunnel. As for completing stadiums and cleaning up around town, the clock's ticking.