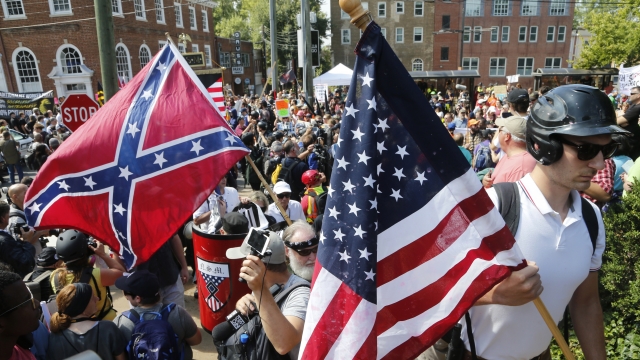 It's been five years since the violent Unite the Right White supremacist rally in Charlottesville, Virginia.

The violent weekend five years ago saw hundreds of Neo-Nazis and White nationalists gathering at the feet of Confederate monuments.

For the people who were there, it's a moment they will never forget.

Kendall King was one of the dozens of students that stood their ground as Neo-Nazis surrounded and intimidated them.

"They had weapons, they had torches, but they also had pepper spray. Sure some of them were armed with guns, glad that the violence didn't escalate any more than it did that night," King said.

The weekend culminated with an act of terror when a car barreled down 4th Street into a crowd of peaceful protesters.

Along with the dozens who were injured, Susan Bro lost her daughter that day.

"They're numbered prints, I've got a few, and her friends have a few," Bro said.

We spoke to Bro in 2018, ahead of the one year commemoration of Heather Heyer's death.

"I'm not the first person to ever lose a child to violence, and I'm certainly not going to be the last," Bro said.

"I felt like when Heather was killed, a mantle was passed to me. And now I'm finding ways to pass that mantle on to other people. Heather was not the only person ever killed by a hate crime in America," she said.

In the wake of the Unite the Right Rally, calls to remove Charlottesville's Confederate monuments intensified.

Ultimately, both statues were removed in 2021.

Charlottesville activists like Ben Doherty had been working on their removal for years.

Now that they're gone, Doherty hopes it creates a more welcoming space for everyone.

"The two parks where the Jackson and Lee statue were located are actually very pretty parks. People often will not feel welcomed, but I'd like to think they at least feel more welcoming to people than when you had these huge, ugly, racist statues dominating the parks," Doherty said.

Jalane Schmidt, a UVA professor and city activist, was at a nearby church across the street while King and others came face to face with hundreds of Neo-Nazis.

"A group of about two or three hundred of them came and they took out their tiki torches. We were having a prayer service. And it was meant to prepare the community for what was coming the following day," Schmidt said.

Schmidt says it wasn't until she got home that she found out there were students out there.

"The university did its own kind of internal investigation, and at first they were rather guarded and quite frankly, not very honest, you know, about what had happened. As you saw with the video of the president, she attempted to claim that they had no prior knowledge of that Nazi torch rally that was going on, which it was discovered later on, you know, in investigations that they indeed did." she said.

In the years since the deadly rally, a lot of the loose ends in Charlottesville have been tied up.

James Fields was sentenced to two life sentences for the death of Heather Heyer.

And in November, a federal grand jury ordered more than a dozen White nationalists and organizers of the rally to pay $25 million in damages to 10 current and former residents of Charlottesville.

But for those who stood face to face with hate that day, this movement is ongoing and is much bigger than Charlottesville.

"We'll never move on. I mean, the trauma that we went through is ongoing and ever, ever present and real," Doherty said.

Doherty says White supremacy is in the country's DNA.

Schmidt says the Charlottesville rally five years ago gave wide exposure to a racist thread of America that has not gone away.

"There's a straight line between what happened here in Charlottesville at the Unite the Right Rally and the attack on the Capitol. So these people are, you know, are quite determined to make political changes by force," Schmidt said.