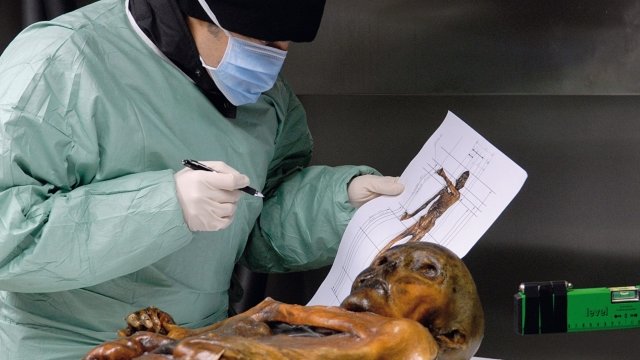 Scientists analyzed the microbiome in the iceman's stomach to reconstruct his last meal and found almost half of it was fat.

For decades, scientists have been studying Otzi the iceman, a 5,300-year-old man found preserved in an Italian glacier. A new study out in Cell Press analyzed the microbiomes in his stomach to reconstruct his last meal. Scientists found almost half of it was fat.

“A diet has to be adapted to your needs also what you are doing. And the iceman tells us I think in the best way he was hiking in the high altitudes in the mountain region and he needs energy, and the best energy source is fat,” Frank Maixner, a Microbiologist at the Eurac Institute for Mummy Studies told Newsy.

You could call Otzi’s last meal the original keto diet. Researchers found almost half of his diet was fat from an ibex, an alpine deer. They say it also included goat dairy products like milk and cheese, as well as whole grains. They also came across molecules which occur in charcoal, coriander oil and lemon oil, suggesting Otzi cooked over a fire and used herbs.

But that didn't kill the iceman. Previous analysis showed he had been shot with an arrow.

Even though the iceman was found more than 25 years ago, research continues to bring up new mysteries. For example, in a 2016 study on Otzi’s intestine and stomach, scientists detected DNA from bacteria that about half of modern humans still have.

An Iceman's Upset Stomach Can Teach Us About The Earliest Europeans

Otzi the iceman has been studied for more than two decades, but researchers are still finding new ways to unlock his ancient secrets.

Moving forward, researchers plan to reconstruct the ancient gut microbiomes of the iceman and other mummies.

“He’s like a window into the past, and people are fascinated. We have somebody who lived 5000 years in Europe ago. He gives us a glimpse into how the people were,” Maixner.