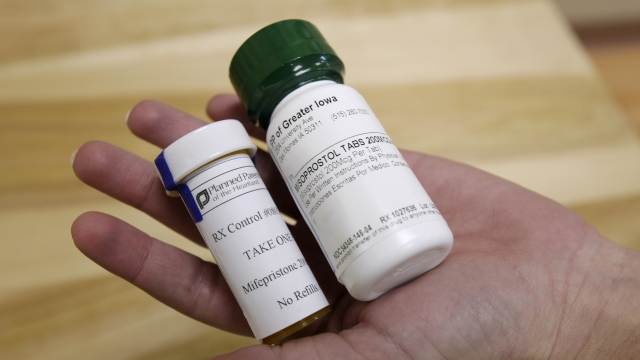 Data from one study show erectile dysfunction drugs have a mortality rate of about four times greater than Mifeprex.

The abortion pill has a long and complicated history that begins in the 1980s.

The pill was first developed as RU-486 in France.

In the 90s, the politics surrounding abortion turned violent. Clinics were bombed, providers were killed and the FDA felt pressure.

"There were a lot of expectations, but there was an immediate knowledge that everyone who touched this drug was afraid," she said.

In the 2000s, the FDA announced the abortion pill would go to market under the brand name Mifeprex.

Here’s how it works: Mifeprex, or a generic version, is the first drug taken to begin a medication abortion by blocking progesterone, a hormone to maintain a pregnancy.

A second drug then expels the pregnancy, completing the abortion.

Mifeprex was heavily regulated and unavailable at pharmacies because the FDA wanted to monitor its safety.

The FDA has years of evidence showing the abortion pill is safe and effective.

According to FDA records, as of 2018 there were 24 deaths associated with the abortion pill. But upon closer look, Newsy found nearly half of the deaths appear to be related to homicide, drug abuse, suicide and emphysema.

And even the FDA said that none of the 24 deaths could be "causally attributed" to the abortion pill — 24 deaths means that for every 1 million patients, 6.5 died.

Dr. Donna Harrison is the CEO of American Association of Pro-Life Obstetricians and Gynecologists.

"I mean it's a procedure, like any other procedure that has complications at a known rate. And the complications can be very serious and sometimes they can kill women. And I think to say anything less is to be dishonest with women," Harrison said.

Six-and-a-half deaths per 1 million patients is a better safety record than antibiotic Penicillin, according to some studies.

But despite the pill’s record, for abortion opponents there’s only one way to make a medication abortion safe: "Not doing it," Harrison said.

"Not doing a medication abortion would would make it safe because it's certainly not safe for the unborn child and it has real risks for the mom," Harrison continued.

Newsy decided to compare death rates of the abortion pill to erectile dysfunction drugs, which are also given to generally healthy people and deal with reproductive health.

Data from one study show erectile dysfunction drugs have a mortality rate of about four times greater than Mifeprex.

In December, the FDA relaxed restrictions on the abortion pill, also known as Mifepristone, allowing certified pharmacies to mail the pill to patients in their homes, and expanding access to medication abortion in many states. Attorney General Merrick Garland defended the decision after the Supreme Court overturned Roe v. Wade.

“The FDA has approved the use of the medication Mifepristone. States may not ban Mifepristone,” citing the FDA’s expert judgment about its safety and efficacy," Garland said.

While the abortion pill could be a way around new restrictions, it also raises new legal questions about access to abortion.