The Alphabet Soup Of Turkish Politics 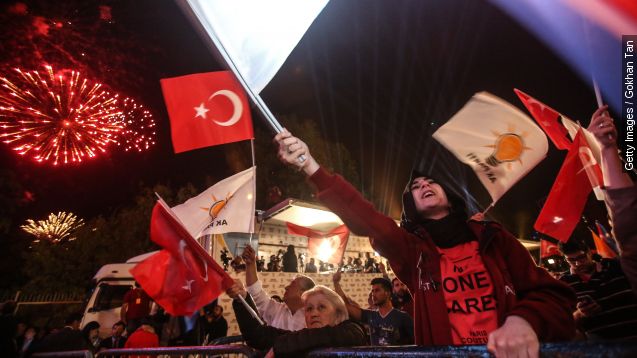 We don't yet know who is behind the worst terrorist attack in Turkey's history. But the country's major factions are blaming one another. (Video via Voice of America)

Here's what you need to know about them — acronyms included.

The conservative Islamist AKP, also known as the Justice and Development Party, governs Turkey — and has for the past decade.

AKP leader and current Prime Minister Ahmet Davutoglu says ISIS is the prime suspect in Saturday's bombings but hasn't ruled out involvement by the PKK, short for the Kurdistan Workers' Party.

Turkey and the PKK are longtime foes. Three decades of conflict between the two left thousands dead. (Video via Al Jazeera)

This summer, the Turkish government expanded its bombing campaign against ISIS to include PKK targets. Those airstrikes continued over the weekend. (Video via TRT)

The leftist, pro-Kurdish HDP, short for Kurdish People's Democratic Party, says the government is escalating the violence for political gain. AKP denies this.

But the thinking is if AKP stirs up enough anti-Kurdish sentiment, it'll undermine HDP's chances in the upcoming election. (Video via Presidency of Turkey)

In June, for the first time in its history, HDP gained seats in Turkey's Parliament — leaving AKP unable to form a coalition and forcing the Parliament to call snap elections.

Despite the recent bombings, those elections are expected to go ahead as planned Nov. 1.