'The Bachelor' Is Back ... And Very White 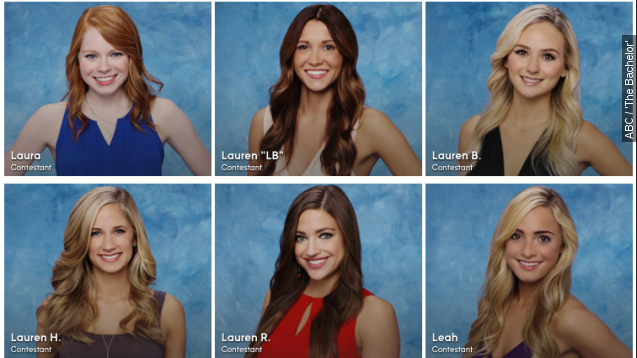 The dating show tends to give more roses to white contestants.

Oh, yes. "The Bachelor" makes its 20th season premiere tonight, and the show itself is as white as the girl probably hosting the watch party.

Of the 28 contestants vying for storybook romance in a televised tabloid, an overwhelming majority appear to be white and all battling for the love of this man, Ben Higgins.

"Every season is going to be different, so this season I think is definitely different than ones in previous," Higgins said on "Good Morning America."

Not so fast, Benny. In fact, this season matches the show's longtime trend of featuring a majority of white women fighting for the love of a most-likely white man. Blogger Karen Cheng tallied up what she called "token minorities" and exposed how they're typically booted earlier than their white counterparts.

In 2012, two men filed a lawsuit against "The Bachelor" that alleged the show refused to cast people of color. That lawsuit was later dismissed.

On the heels of the suit, ABC decided to give us our "first non-white bachelor" with Juan Pablo Galavis. He was a blond-haired, blue-eyed Latino who said super tolerant things like this:

"Do you think it would be a good idea at some point to have a gay or bisexual bachelor?" Sean Daly asked Galavis.

"Just because I respect them, but honestly, I don't think it's a good example for kids to watch that on TV," Galavis said.

Galavis and the network later apologized for the comments.

It is important to note that ABC does feature prime-time shows like "Fresh Off the Boat, "Black-ish" and "Modern Family." Those shows have led the pack in making our color TV sets more colorful.

It just seems the network thinks falling in love should be left to fair-skinned girls named Lauren — because there are four of them in this season alone.