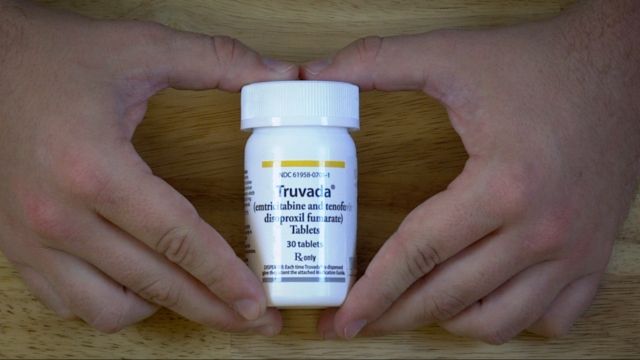 Truvada is also known as PrEP. PrEP stands for pre-exposure prophylaxis, and when taken daily, it's up to 99 percent effective at preventing the contraction of HIV.

PrEP has been used in HIV prevention since 2012. Since gay and bisexual men account for 83 percent of the estimated new HIV diagnoses among males 13 and older, it's changed the game for the LGBTQ community.

But these little blue pills come with several barriers, like price. Without insurance or financial assistance, Truvada can cost upward of $1,700 for a one-month supply. It's a price that can easily discourage an at-risk person, until you meet someone like Owen Davis, who is a PrEP navigator at Chicago House and Social Service Agency. It's an organization that serves individuals and families who are disenfranchised by HIV/AIDS, LGBTQ marginalization, poverty, homelessness and/or gender nonconformity.

Newsy's Cody LaGrow sat down with Davis, who says his role is to be like a client's best friend but with better information.

NEWSY'S CODY LAGROW: Why is PrEP so important to you?

OWEN DAVIS: We know condoms work really well if you use them like you're supposed to. We know that abstinence is cute, I mean. But we also know we've had these things for a large amount of time, and we know that HIV is a present epidemic. Anything we have in the arsenal to use in the fight against HIV, we should use. And if it's someone who has a number of barriers to where they can't think about PrEP, I would address those first.

LAGROW: Gilead, the drug's manufacturer, does offer a copay card that covers up to $3,600. But, if you're uninsured or underinsured, that may not be enough. How do you address that?

DAVIS: There are other foundations besides the Gilead copay card that can help you pay for your copays. So it's just a process, but it's a process that I'll be there with you.

LAGROW: But what if it's not about the money for someone? Why would they be afraid to discuss PrEP with their doctor?

DAVIS: There's a lot of slut-shaming attached to PrEP. That bothers me so much.

DAVIS: We're super sex positive. We don't care what you're doing; we just want to help you do it in a safe way.

For Davis' clients, he may take them to Howard Brown Health Center to meet someone like Kristin Keglovitz Baker. She is the chief operating officer and a physician's assistant and helps get PrEP in the hands of thousands of patients.

LAGROW:  Has PrEP made the conversation about sex better between patient and doctor?

KRISTIN KEGLOVITZ BAKER: The value of PrEP isn't always in writing the prescription. Sometimes there's a great conversation that happens about prevention and sexual health and people really feeling empowered to sort of take on their own prevention story and message.

LAGROW: How does Howard Brown knock down barriers and help its clients?

KEGLOVITZ BAKER: We have case managers who can help with a lot of the navigation of the health care system — insurance, copay, we have a pharmacy right on site at all of our locations where we'll able to get through those sort of barriers to treatment and get access.

LAGROW: What do you see for the future of PrEP?

KEGLOVITZ BAKER: I think Truvada, which is approved for PrEP now, will go generic in the next couple of years. That's going to be a game-changer in terms of affordability. I do think it's something that I hope we will be talking to people at a much younger age so they at least know what's in the toolbox.

Critics of Truvada say the drug promotes unsafe practices and can be linked with a rise in sexually transmitted diseases like gonorrhea, chlamydia and syphilis. PrEP doesn't protect you from STDs.

LAGROW: What do you say to the critics who link PrEP with a rise in STDs?

KEGLOVITZ BAKER: Those are all treatable diseases. And although we don't want patients to necessarily have higher rising rates in the US of those three, they are things I can easily manage and treat and cure. And I think that if I can still have benefit to preventing new HIV infections, which is chronic and doesn't have a cure, we still have benefit.

For Davis, he sees firsthand the impact this drug has on his clients.

LAGROW: Do your clients feel like they took control of their sex lives again?

LAGROW: Where would you like to see the future of PrEP go?