How Window Masks Can Help The Deaf, Hard Of Hearing Amid The Pandemic 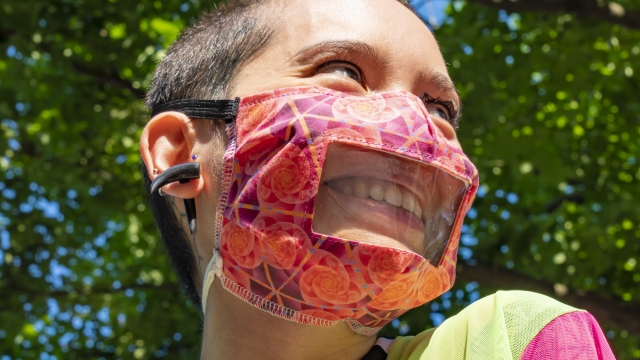 Approximately 48 million people have some degree of hearing loss. Window masks can help them communicate while still protecting wearers' health.

With more people wearing masks now in the interest of public health, some say it’s worth considering masks with clear windows where people can see your lips. Since masks like this already muffle our voices, window masks are especially helpful for people who are deaf or hard of hearing.

"It's important to me because I rely on lipreading so much to be able to get information."

Nicole Hausman is a mentor at The Family Connection of Language and Learning, and she's also deaf. She finds going to the grocery store one of the hardest places to navigate, now that everyone wears a mask when shopping. She hasn’t seen anyone wearing a window mask — but says it would help.

Hausman: "I don't bother asking anybody questions when they're wearing face masks because I know there's no chance of understanding them. ... Now, if they had a clear mask on, I would be able to talk to the person, the employees, and ask for help."

Hausman says if she does need to communicate she writes on a piece of paper for others to read. Approximately 48 million people  have some degree of hearing loss. A spokesman from the University of Gallaudet, one of the top universities for deaf and hard of hearing, said, "Window masks do make it possible to speechread" — or lipread — "and to see facial expressions, both with speech and with American Sign Language." They also clarified that while these masks can help, not everyone who is deaf or hard of hearing are skilled at lipreading, since there are many factors at play.

Sky Cubacub is a fashion designer who specializes in gender non-conforming clothing centered around the LGBTQ community and people with disabilities. Cubacub started adding window masks to their fashion line and asked for feedback on the prototype.

"I sent a bunch of the windowpane masks to a friend of a friend who is deaf. … They were just, like, so happy, ... and I guess that they said that they cried because they were so happy that they could see people's faces."

In addition to window masks, Cubacub is exploring ways to improve face coverings.

"A lot of times the fabric ties might not be accessible to folks who don't have, like, fine motor skills or who just, like, can't raise their hands above their head for that long. The ear loops, if you don't have ears, or, like, if you don't have one ear. ... Having these snaps and Velcro versions just are a lot simpler."

Alicia Austin teaches infants and children who are deaf and hard of hearing.

Austin: "When you take away that volume from somebody who is already using some sort of technology or overcompensating on their own, it makes it incredibly difficult to carry on a conversation."

Children, regardless of hearing abilities, need to see facial expressions and recognition in order to learn. Austin wears her mask during her Zoom calls so her students will get used to them when she finally sees them in person.

Austin: "It kind of looks silly. So we've done some of that play, putting it on bears, putting it on me. The children are wearing them so that when we do get together, it won't be as bad."

She also says there are a lot more benefits to window masks.

Austin: "I think so often, we think of hearing loss is being profoundly deaf. No. No sound at all. But think about using a clear mask for grandparents who might have diminished hearing and don't even realize how much they rely on face-to-face interaction to understand."