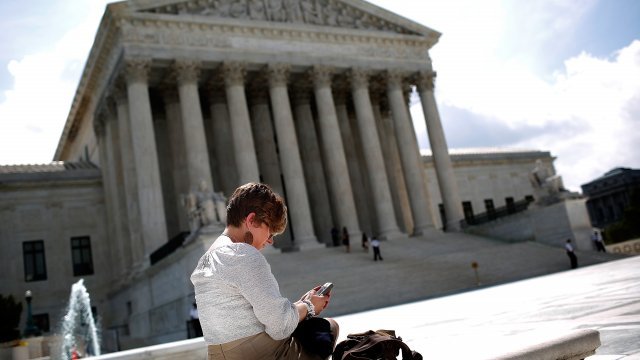 The Supreme Court is now hearing a case that could transform digital privacy laws forever. Carpenter v. the United States asks the question: Does the Fourth Amendment protect cellphone users' data? And can law enforcement review that data without a search warrant?

Timothy Carpenter was sentenced to 116 years in prison for his role in a string of armed robberies in Michigan and Ohio. Investigators used months worth of location data from Carpenter's cellphone company to help prove he was involved in the robberies.

Carpenter's phone, like everyone else's, automatically connected to the nearest cellphone tower while it was moving around the city, which created essentially a time-stamped map of all his movements. That data is collected and stored by the cellphone company.

The police argue when you sign up for a cellphone plan you submit to what's called the "third party doctrine" — which says people who voluntarily give information to third parties, like cellphone companies, have "no reasonable expectation of privacy."

And while that's extremely helpful for police looking to catch an alleged criminal, some say the Fourth Amendment should keep authorities from having access to that data.

The FCC Plans To Roll Back Net Neutrality Rules

"To extend the third party doctrine to the digital world would be to render the Fourth Amendment a dead letter for most of the surveillance that matters today … The world that is not connected to the internet is shrinking," Alex Abdo of the Knight First Amendment Institute said.

Several major tech companies, including Apple, Facebook and Google, have weighed in — filing a brief with the Supreme Court. The brief says the third party doctrine should not apply in "a world where devices and applications constantly transmit data to third parties by dint of their mere operation."

Before appearing before the Supreme Court, a Sixth Circuit Court of Appeals ruled against Carpenter, saying his cellphone data fell "on the unprotected side" of the Fourth Amendment.