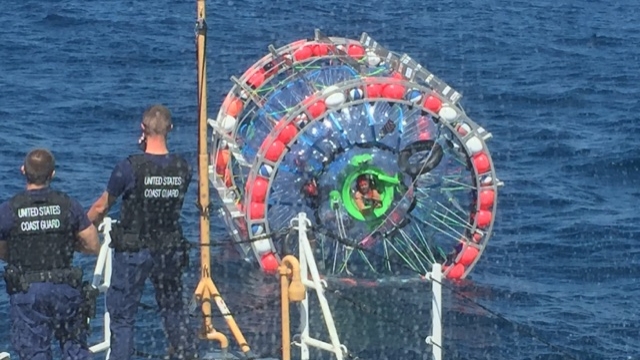 Reza Baluchi had to be rescued for the second time while attempting to "run" from Florida to Bermuda in his hydro pod bubble.

Most of us can probably say we’ve never tried to run across the ocean in a giant bubble. Reza Baluchi isn’t most of us — he’s tried it twice now.

Last Friday, the endurance runner set out from Pompano Beach, Florida, in his "hand made hydro pod bubble" in an attempt to run his way to Bermuda.

Only, he didn’t make it that far. We’re not sure why Baluchi gave up on his hamster wheel mission this time, but we do know he did so voluntarily.

That wasn’t quite the case back in October 2014. The first time Baluchi tried to make this voyage he reportedly dropped his GPS in the water and ended up asking nearby boats for directions to Bermuda.

The U.S. Coast Guard didn’t find that amusing. After initially refusing to be rescued, Baluchi eventually became so exhausted that rescuers brought him back to land.

The Coast Guard has kept a less-than-friendly tone with Baluchi ever since. According to WPLG, his initial rescue cost taxpayers more than $140,000.

Which was a good enough excuse to slap him with this denial letter ahead of his most recent effort. The Coast Guard told the runner he was "not authorized to depart" because his "vessel and the conditions" are unsafe.

Not only is Baluchi’s ego wounded, he could face up to seven years confinement and a $40,000 fine for forcing the Coast Guard to come and fish him out of the ocean — again.

This video includes clips from CBS and WTVJ.