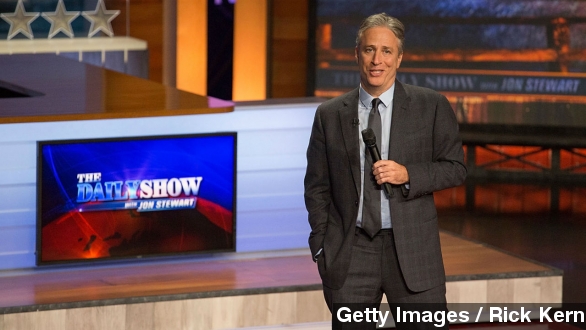 There are loads of talented entertainers who might have a shot at the Comedy Central faux-news desk.

By now, you've likely heard the news Jon Stewart is leaving "The Daily Show." And if you watched last night, you heard the news from the man himself.

"In my heart, I know it is time for someone else to have that opportunity," Stewart said.

And just like that, we went from, "All good things must come to an end," to "Who'll fill Stewart's incredibly big shoes?"

There are loads of talented comedians already being touted as having a shot at the Comedy Central faux-news desk.

The more obvious choices involve veterans of the show like Samantha Bee, the show's longest-running correspondent.

Or Jessica Williams, who was only 22 when she started with the show in 2012, making her the youngest "Daily Show" correspondent ever.

Hannibal Buress' profile has certainly risen since drawing attention to the allegations against Bill Cosby, and he already has a relationship with Comedy Central as an actor on "Broad City."

Perhaps the most mentioned name out there already has her own show on the network: Amy Schumer.

If you're noticing a trend in possible replacements, it's because many outlets are speculating Comedy Central will buck the late-night tradition dominated by white men.

“Comedy Central — and 'The Daily Show' specifically — has long been an incubator for talent. ... These men have become icons in their own right, an indelible piece of comedy history. It’s time that they do the same thing for a woman.”

CBS had the chance to do that last year when Craig Ferguson announced his departure from "The Late Late Show." But, the network went with ... another white guy: James Corden.

Good luck to whoever has to follow this act.