The Debate In Chicago Over Illegal Guns And Violence 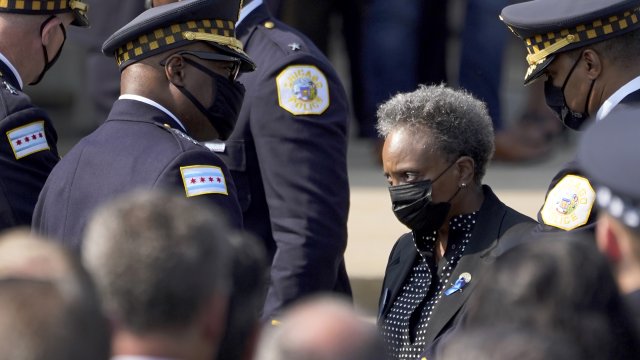 As Chicago deals with record homicides, city leaders debate the value of seizing illegal guns and why people carry in the first place.

As the nation deals with a rise in homicides involving firearms, the city of Chicago continues to deal with a historic rise in violence. Shootings in Chicago are up 68% compared to 2019, and murder has jumped by 56%.

In response, the Chicago police have made a point of cracking down on illegal guns

But some say this guns-first crackdown misses the point.

“Most of them will carry a gun because they have to,”  said Lamar Johnson.

Lamar Johnson is the director of the B.R.A.V.E. Youth Leaders in Chicago, an anti-violence organization focused on teens. Over the years, Johnson has lost multiple members of his program to gun violence, including a 14-year-old this summer.

“These young boys should not be getting felony convictions and going to jail for having guns. They just shouldn't,” said Cathryn Crawford.

Cathryn Crawford works for the Lawndale Christian Legal Center representing youth from the area in court.

Crawford says her clients often know the legal risks of carrying a gun and choose to do so anyway.

"I've had countless young people have friends die, and they take a gun to the funeral. Not because they're going to use it. But because they think it'll keep them safe," said Crawford

According to the Chicago Police Department, it has recovered more than 9,000 illegal guns this year and is on pace to recover the most ever in the department’s history.

CPD and Chicago Mayor Lori Lightfoot have pointed to illegal guns as the best way to solve the city’s longstanding violence problem.

"You’ve heard me say this before and I’ll keep saying it until it is no longer true, our city is awash in illegal firearms.” said Lori Lightfoot Mayor of Chicago

But for State’s Attorney Kim Foxx, who has faced mounting criticism for who she does and doesn’t prosecute, everyone caught with an illegal gun shouldn’t be treated the same in court. According to Foxx, the vast majority of people arrested for gun possession are not tied to a violent gun offense.

“That's why we have to be nuanced. Because I think when we talk about illegal guns in the same way that we talk about people using guns for violence, that nuance is lost."  said Foxx. "And it has a particular impact on Black and brown communities.”

CPD gun arrests have nearly doubled since 2014. A statewide program for first-time weapons charges has eased the number of non-violent gun offenders being sent to prison but in 2020 7000 people were arrested on illegal gun charges.

“You don't have to be a part of something or be at target of something to be involved in something." said Johnson "So just that anxiety, just that nervousness that people have, that's the reason why. I don’t think our city leaders really understand that.”