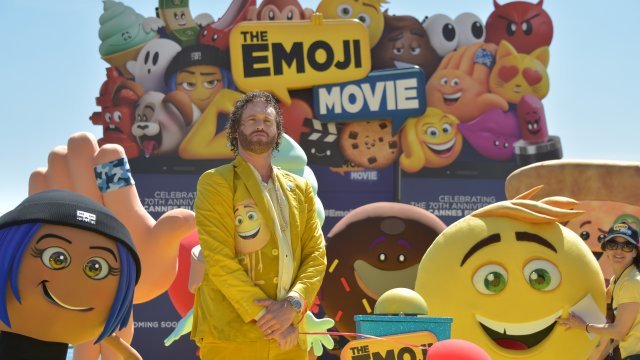 While "The Emoji Movie" didn't flop at the box office, it did face-plant with critics — it holds a regrettable 8 percent on Rotten Tomatoes.

Holding on to the No. 1 spot for the second week in a row is Christopher Nolan's "Dunkirk," bringing an estimated $28 million and pushing its worldwide box office total past $234 million. Along with the stellar reviews "Dunkirk" has enjoyed from the beginning, the World War II film is now a box office success as well.

At No. 2 — well, that's a very different story. Taking the No. 2 spot and setting all millennials back in the eyes of the public is “The Emoji Movie” — an entire film based on a smartphone feature. The T.J. Miller-led animated film brought in an estimated $25.6 million in its debut weekend.

Which, for Sony Pictures, is fine. The movie only cost $50 million to make and, for now, there are no other new animated films for kids to go see.

The "Ninjago" film, part of the extremely popular Lego movie franchise, doesn't hit theaters for another two months, giving the "The Emoji Movie" a lot of box office breathing room.

But none of that stopped critics from laying it on pretty heavy. This may be a kids' movie, but these are not kid-friendly reviews.

"The Emoji Movie" hung out around 0 percent on the Tomatometer long enough for people to take notice, and as of Sunday afternoon it sits at a heartbreaking 8 percent.

There is some good news at the box office this weekend: "Girls Trip" continues to do extremely well, bringing an estimated $20 million in its sophomore weekend. "Girls Trip" even managed to hold "Atomic Blonde" out of the top three, despite this being Charlize Theron's debut weekend.

As for next week, Matthew McConaughey plays a charming villain.