The Changing Tunes Of Music Festivals From Woodstock To Coachella 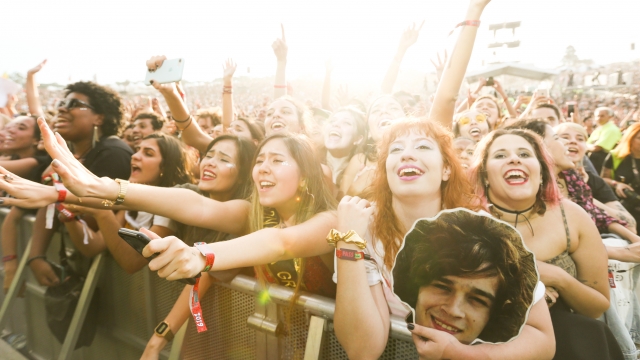 Music festivals haven't always been known for their large crowds and flower crowns. In fact, they were scarce in the '70s and '80s.

"The stage is nearly set for Lollapalooza."

"The concerts at Bonnaroo kick off tomorrow in Manchester."

"The lineup for this year's Coachella has been released."

From Coachella to Bonnaroo to Lollapalooza, it's the start of the summer music festival season — and this year is extra special.

Coachella celebrated its 20th anniversary, and Woodstock — one of history's most iconic festivals — is celebrating its 50th. ["This is the largest group of people ever assembled in one place."]

The impact of the 1969 Woodstock concerts and the current popularity of events like Coachella might make it seem as if music festivals have always been successful.

That couldn't be further from the truth, and to explain why, we need to talk about Altamont — a fatal music festival that happened just four months after Woodstock.

Altamont's problems began with its hired security — Hells Angels bikers that reportedly beat fans that got too close with pool cues. One of the victims was a black teenager named Meredith Hunter. His fatal stabbing at the hands of the bikers was captured on film.

Music magazine Consequence of Sound reports that Hunter's gruesome death at Altamont ruined the appeal of music festivals all over the country, to the point where planners faced major resistance from local communities. In 1970, Oklahoma's governor even prepared 300 members of the National Guard to enforce a court-ordered ban on music festivals.

As a result of this backlash, music festivals were scarce for more than two decades.

It wasn't until the '90s — starting with the 1991 Lollapalooza tour — that music festivals made a comeback. The New York Times called Lollapalooza "a Woodstock for the Lost Generation," and it continued touring until 1997. Now, it's an annual Chicago staple.

The same decade Lollapalooza came out, two other major festivals followed suit: Woodstock's 30th anniversary festival and the first Coachella. One of them set the tone for the next two decades of music festivals, and the other nearly destroyed the industry yet again.

Let's start with the disaster. Woodstock's 30th anniversary concert in 1999 resulted in eight reported rapes, 44 arrests and thousands of people seeking medical attention. Years after the festival happened, HuffPost referred to it as "The Day The Music Died."

Coachella, which had its first festival in 1999 as well, saved the music with better organizing, larger venues, multistage programming and corporate partnerships.

That success continued, and other music festivals like Bonnaroo, Riot Fest and Pitchfork followed.

in 2017, Coachella became the "first reocurring festival" to break $100 million in one year. This year, general admission passes for the first weekend of the festival sold out in just 40 minutes. Those passes, by the way, cost $429.

As the industry grows, music festivals are facing new challenges: security and hype.

In the spring of 2017, the fiasco that was the Fyre Festival failed to meet the luxury expectations it set for itself. Tickets cost from $1,000 to $250,000, but the event lacked proper accommodations, food, security and performers — which is kind of the point of a music festival.

The Fyre Fest now serves as a cautionary tale for other events that seek to meet overblown expectations. But another festival later that year changed the way music festivals handle something more important: mass shootings.

In the fall of 2017, a mass shooter killed 59 people and injured more than 500 at the Route 91 Harvest music festival in Las Vegas.

It was later discovered that the gunman may have planned a similar attack on Lollapalooza. Fears of more shootings led to the addition of more law enforcement, security checkpoints and metal detectors in music festivals all over the country.

All of this goes to the show the evolution of major music festivals over the past 50 years. The success of each festival isn't consistent or guaranteed, and neither is the path the industry takes.

One thing is persistent, however: the allure of celebrating music as a community.

Michael Lang, one of the original organizers of the 1969 Woodstock festival, wrote in his memoir, "This is the way to hear music, I think, surrounded by rolling hills and farmlands, under a big sky."