The FAA And Other Hurdles For Amazon's Drone Plans 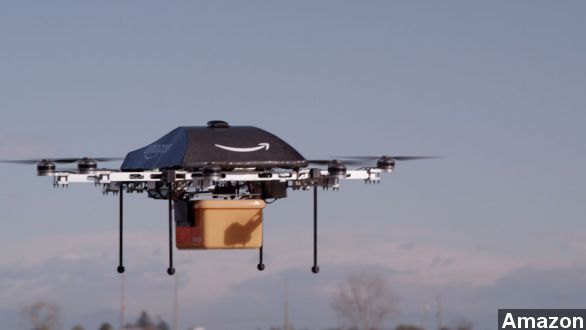 Amazon CEO Jeff Bezos announced plans to deliver Amazon packages by drone, but there are quite a few obstacles in his way.

When Amazon CEO Jeff Bezos announced his plan to fill the skies with package delivery drones by 2018, it got a lot of people excited about the revolutionary new future those drones would usher in.

"Total gamechanger, it's real disruptive technology. And to be able to change the e-commerce and the delivery mechanisms to get packages to end users? I mean, this is it." (Via Fox News)

But Amazon still has a lot of hurdles to overcome before its potential drone armada becomes a reality. Obstacle number one is the Federal Aviation Administration.

While the FAA has selectively approved domestic drone operations since 1990, there's still a blanket ban on commercial drones in U.S airspace. The agency has increasingly made exceptions on a case-by-case basis. (Via Bloomberg)

Congress passed a law in 2012 requiring the FAA to integrate drones into national airspace by 2015. The FAA recently released a roadmap outlining some potential regulations for drones, as well as challenges the agency will need to overcome in the next few years.

But the FAA is already behind schedule — and it doesn't look like regulators were planning to monitor anything like the ambitious delivery network Amazon hopes to set up.

A writer for The Christian Science Monitor points out the FAA's regulations are mostly aimed at drone uses in aerial photography or surveying. "Amazon's plan probably falls into the FAA's long-term outlook – meaning it couldn't gain approval until 2022 or 2026."

And there are other challenges the company will have to overcome. Slate points to making the drones reliable. "Otherwise some will crash every day, and Bezos will have to hire an army of people to drive around, pick up the fallen drones, deliver the packages, and refurbish the drones."

And a professor tells The Washington Post there are legal liability issues to consider. "You're talking about eight spinning blades that you are now, by design, putting very near to people. ... It's all fun and games until little Sally loses a finger."

And even after Amazon manages to overcome those obstacles, there's still one more factor standing in the company's way: hacking.

A research team demonstrated to Congress last year GPS-reliant drones like the ones Amazon hopes to use are vulnerable to being hijacked with false coordinates. (Via Wired)

So if Amazon wants a drone delivery network in the near future, its got a lot of work to do. But a Quartz writer notes Bezos' lofty goals put Amazon in prime position to take advantage of whatever commercial drones have to offer.

"By making such a public splash, the company is practically guaranteed a place at the table in any future US discussions of commercial drone regulation. ... Being a leader in drone delivery could be seen as a key part of Amazon’s future strategy."

Amazon's not the only company experimenting with delivery drones. In September, China's SF Express unveiled their own drones designed to carry packages to hard-to-reach rural areas. (Via South China Morning Post)