Drones Endanger Other Aircraft, But Finding Culprit Pilots Is Tricky 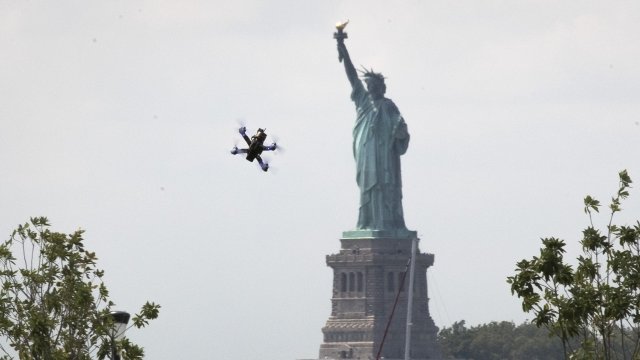 The Federal Aviation Administration wants to figure out how to find drones and their operators, in case their flights become reckless or dangerous.

Wayward drones keep showing up over public events, crashing near government buildings and shutting down wildland firefighting. And so few drones are registered with the government that when one does something dangerous, it's nearly impossible to find the pilot.

The Federal Aviation Administration wants to change that. It currently gets more than 1,000 reports every year of dangerous drone activity but has only been able to pursue 74 cases to date. To raise that number, the agency is pushing for better tools to learn who's flying that drone.

It's possible to track a drone operator's location based on signals coming from the drone and the controller. The FAA has hired contractors to install special equipment around airports that can figure out where to find the pilot.

When Can The Government Bring Down A Drone?

Government agencies are trying to develop clear rules on when an agent can shoot down a dangerous drone, but the process could last years.

But that's an expensive option, and the FAA would rather work with companies themselves. At a recent hearing on drone security, one FAA rep said the agency wants to bake identification into drones before they're even sold to consumers, so authorities can scan a drone and instantly see who it belongs to.

DJI, whose drones make up a big chunk of today's hobbyist market, has a scanner that does just that. It will show nearby drones' flight paths and serial numbers — the equivalent of license plates. It's aimed at authorities and airports who need to maintain drone-free zones.

That kind of tech could become mandatory for all drone-makers. The FAA has recommended new rules that would require drones to broadcast their IDs — over Wi-Fi, or even with their running lights if necessary. Older drones might have to be updated to comply as well.

And finally, there's the option to program the drones themselves to avoid breaking the law in the first place. Some manufacturers can program in no-fly zones that their drones will respect. If one gets too close to a restricted area, it will limit its own flight range, stop in midair or even refuse to leave the ground.