The Family Behind France's Rising Far-Right 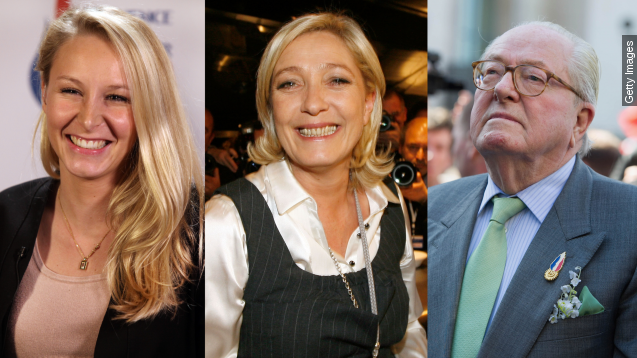 There's one family that's been behind the rise of the far-right in France, and each generation seems to move the ideology more into the mainstream.

In stereotypically progressive France, it seems the far-right is on the rise. But there's one name underwriting it: Le Pen. (Video via BBC)

First, you've got Marine Le Pen, the president of the right-wing National Front, which just won big in regional elections. (Video via France 24)

"There will be in these immigrants, terrorists," Le Pen told CNN.

Her father is Jean Marie Le Pen, who founded the National Front, and served as its outspoken leader for close to 40 years. (Video via French National Audiovisual Institute)

"I'm not going to bow down before anybody, not even before Marine," the older Le Pen said.

Jean Marie's extremism — he's been convicted of racism and Holocaust denial — led to rifts with his daughter, who ultimately expelled him from the party. (Video via French National Audiovisual Institute)

But the newest face of the party is Marion Marechal-Le Pen, niece of Marine and granddaughter of Jean Marie. (Video via RTL)

In 2012, she became the youngest ever French member of Parliament at 22, and since then, she's steadily gained prominence. (Video via BFMTV)

She's against immigration, like her aunt, but she's also spoken out forcibly against gay marriage and Islam in France, while her aunt has tried to make the party more mainstream ahead of national elections in 2017. (Videos via BFMTV, Channel 4, France 3)

Nevertheless, she's poised to become the face of the party, and as the National Front shows no signs of going away soon, neither do the Le Pens.