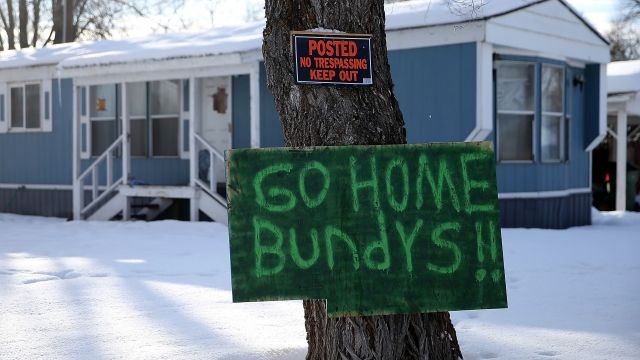 The FBI has been criticized for its "passive approach" to the Oregon occupation, but it may be trying to avoid the violent resolution of past sieges.

As the armed militant occupation of the Malheur National Wildlife Refuge stretches into its third week, Oregon Gov. Kate Brown has asked the federal government to intervene.

She wrote in a letter to FBI Director James Comey, “Efforts to negotiate have not been successful, and now it is unclear what steps, if any, federal authorities might take to bring this untenable situation to an end and restore normalcy to this community.”

The federal government has been criticized for its “passive approach” to dealing with the armed protesters. But it could have something to do with the FBI’s past missteps with armed conflicts.

In 1993, more than 80 people, including four federal agents, were killed in an armed standoff in Waco, Texas. Cult leader David Koresh and his followers held out for 51 days before the FBI advanced on them, prompting them to set their compound ablaze and killing almost everyone inside. (Video via CNN)

The FBI appears to have learned its lesson. A hostage negotiator from that siege was hired out of retirement to help with the situation in Oregon.

Danny Coulson, who used to run the FBI’s Hostage Rescue Team, said it’s better to let a group end a siege on its own, rather than to force their hand one way or the other.

He said, “Sooner or later, the wives are going to get sick of the sight of their husbands screwing around out there, or they’ll need to go get cigarettes. It will end the right way.”

And if the federal forces opted to take out the militia through force, that could end up backfiring on the government in a big way.

The director of the Anti-Defamation League’s Center on Extremism told the Guardian taking such an aggressive approach would play right into the militia’s hands, especially since they’ve already expressed their willingness to die for their cause.

He said, “If you try to use force to resolve the situation, there’s a risk that one or more of the extremists involved may be killed and turn into martyrs. You can end up spawning far more retaliatory acts of violence than whatever harm the initial incident could have caused.”