Trump's Govt. Shutdown Is Undermining His Own Criminal Justice Reform 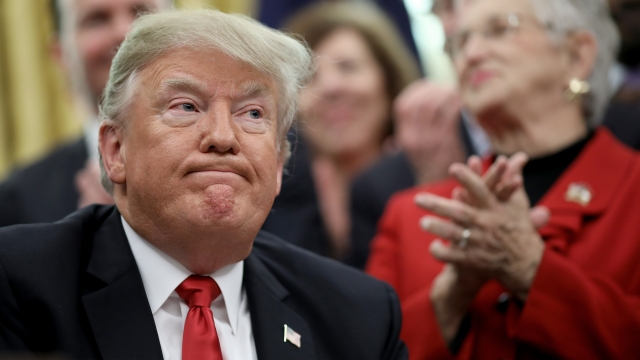 More than 4000 prisoners who should be eligible for early release or a halfway house are currently stuck in limbo.

The federal government has been partially shut down for more than 24 days — making this the longest government shutdown in American history.

An unintended consequence of this historic gridlock has been its effect on one of President Trump's biggest accomplishments of the past year: criminal justice reform.

"Now, literally hours after I sit next to President Trump and watch him sign the First Step Act into law, the government shut down and it stayed shut down ever since then."

That was Jessica Sloan, the national director and co-founder of #Cut50, a prison-reform initiative that lobbied to get the First Step Act passed.

Sloan added, "We enjoyed it for a few hours. But then it was time to get back to work. Because we know when you pass a law, majority of the work is just getting started. The biggest problem is the implementation and making sure that the BOP and the AG's office are on board with our view of what this bill is supposed to do."

One of the more immediate things this bill is supposed to do is cut the sentences of federal prisoners by expanding "good time credits," but with several government employees not coming to work, it's left many prisoners and their families stuck in limbo.

"There's a lot of folks missing at the AG's office and the people who would have done that work of reading the law and then writing the implementation guidelines are simply not there. Therefore, the BOP has been left to figure out, you know, how they think they should be applying things," Sloan said.

According to Sloan, the Bureau of Prisons interpretation could leave prisoners waiting more than six months for this piece of the law to take effect.

There's reportedly more than 4000 federal prisoners who, under the new time-credit expansion, are eligible to be moved into a halfway house or now qualify for early release. But the Bureau of Prisons has opted not to move forward with recalculating these prisoners sentences. Instead, it's waiting on further action from the Attorney General and the Department of Justice.

"They do have existing authority already, that if they want to, if the White House wants to, they can go ahead and issue a directive that will say … recalculate it immediately. So, that's what we're asking for, that's what we should all be pushing for is that they go ahead and immediately recalculate all of these because I think there's about 4500 people who would then be coming home," Sloan said.

But with no end in sight for the government shut down and lots of federal workers staying home, Sloan and other prison reform advocates are (for the time being) stuck running in place.