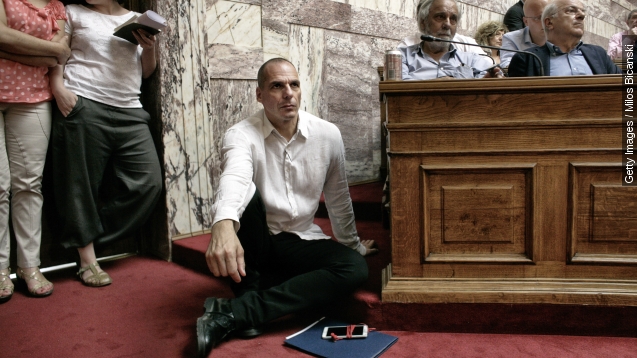 If Greece votes yes in the referendum ...

"Come Monday night, you will not be Finance Minister?" said Guy Johnson on "The Pulse."

"I will not," said Greek Finance Minister Yanis Varoufakis.

That's Greece's finance minister. He also said he would rather cut off his arm than sign another agreement that doesn't include a reorganization of Greece's debt. We're wondering if he means this arm. (Video via Skripta TV)

The referendum he's talking about will let Greek voters decide whether or not to accept a deal from creditors on Greece's bailout.

But the proposal in question isn't even on the table anymore after a bailout package expired at midnight Tuesday. The New York Times writes, "Confused? Welcome to Greece."

And no matter what Greek voters choose, there isn't a clear outcome. If Greeks choose yes, it will probably lead to new negotiations to find a different deal. (Video via BBC)

And Greece's Prime Minister, Alexis Tsipras, has said he also wouldn't stay in office. That means a "yes" vote could lead to elections.

If Greeks choose no, it will still probably lead to new negotiations to find a different deal. But a "no" vote also increases the risk of Greece leaving the eurozone.

That's why the stakes are so high for this referendum. But many observers say either way the referendum goes, a "Grexit" could still be on the table.

And eurozone finance ministers are waiting for the referendum for further bailout talks. Greeks will cast their votes July 5.