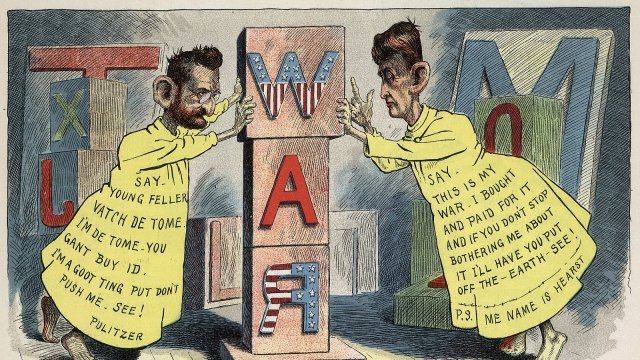 Hearing from "both sides" is actually a relatively new phenomenon.

"Media bubbles" are actually nothing new. They were floating around long before Twitter and Facebook and cable news. Let's go back 1828: If you were opposed to Andrew Jackson being president, you probably read newspapers that attacked him for marrying a woman before she was divorced.

If you supported Jackson, you probably read newspapers proclaiming his innocence.

Objectivity? Balance? They were pretty much impossible to find. Political parties actually provided the financial support for many papers in the 19th century. But that gradually changed as new revenue streams opened up, like advertising from department stores and Ivory soap in the 1880s.

Many newspapers moved to the middle, less partisan but often sensational — yellow journalism — think tabloids at the grocery store checkout. A notable exception to the sensationalism came in 1851 with the launch of the New-York Daily Times, which became The New York Times six years later. It aimed for restraint and sophistication. And politically, the founding editor, Henry Raymond, declared a more neutral approach. And the trend spread to big cities in the early 1900s.

Radio news, which began in the 1920s and grew in the '30s and '40s, for the most part used a straightforward, objective presentation. Edward R. Murrow's "This is London" reports during the German blitz are an example. There were exceptions. Walter Winchell combined news and gossip. (Again, the media bubbles have inflated and deflated over time.) Broadcast TV news, in part because it used public airwaves and the Fairness Doctrine, occupied the middle road, never too left or right. Probably no evening news anchor personified it more than Walter Cronkite, "the most trusted man in America."

Then the Fairness Doctrine was revoked in 1987. An immediate result: Partisan radio broadcasts soon exploded, especially conservatives like Rush Limbaugh and Dr. Laura. But the biggest modern bubbles  — cable news and the internet — were just coming up on the scene. Cable isn't a public airwave, it's a private business — anyone can say whatever they want. In 1996, Fox and MSNBC both got their starts veering hard right and left as they got more competition from 24-hour online media.

Now pick any size screen, phone, PC, TV, and it's possible to read, watch and listen to "news" that reinforces your personal opinions — free of any challenging opinions or facts. Will that bubble ever burst? Will it grow? We'll see.