The history of our pursuit of a flying car 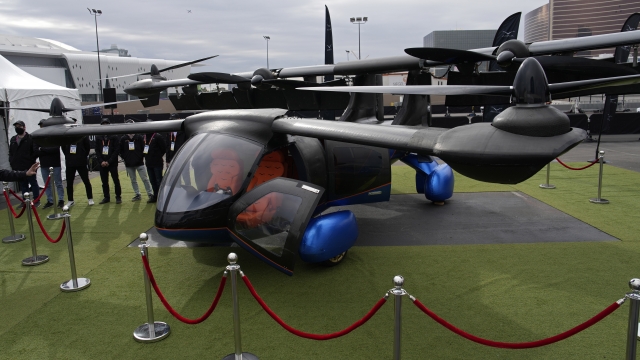 What if you never had to worry about sitting in bumper-to-bumper traffic? Flying cars present that opportunity — but they’re not a reality yet.

It’s a mode of transportation that’s captured our imagination for years — the flying car. For over a century we’ve dreamed of the ability to lift off from our driveways.

Janet Bednarek is an aviation historian who says our collective interest in a flying car elevates thanks to the invention of airplanes.

"Americans are obsessed with flying cars because they see in that technology the ability to realize our dreams of freedom and mobility," Bednarek said. "People began to think, 'Well, what if we could combine the automobile with the airplane and have a flying car? Then we could have the best of both worlds. We could have the mobility on the ground and we could have mobility in the air.'"

But even before the Wright Brothers took flight in 1903 there was a desire to fly.

In 1856 French aviator Jean-Marie Le Bris developed an albatross-inspired glider for the skies. In one attempt the early flying-car contraption carried him nearly 300 feet off the ground.

Fast forward to 1910, when American Glenn Curtis designed a flying boat prototype. In 1919 the Navy used a later model for the first transatlantic flight, but it was a far cry from a flying car.

Almost a decade later there was new hope for a machine that was part car, part plane. Inventor Sherman Fairchild produced an automobile with wings that folded. At the time, Popular Science magazine wrote that "a serious competitor for space in the garage has just been built," and noted it could be "driven along the highways like an automobile."

Are Flying Cars Closer To Reality? This Prototype May Help

Flying cars — a long-envisioned but elusive concept — are closer to taking flight. But the launch of a prototype at CES was unexpectedly delayed.

In 1933, Eugene Vidal, the director of the U.S. Bureau of Air Commerce, announced a plan and competition to develop a personal aircraft. He even showed off one model with his son.

After World War II, Robert Fulton Jr. debuted the Airphibian — an aircraft car built so its wings could detach.

"So you would take the wings off, the tail off, and you would actually kind of cart them around on a little trailer behind the rest of the vehicle, which could then go down the road," Bednarek said.

The model received government approval, but it never caught on. Still, today, the pursuit of a personal flying vehicle is far from grounded.

"We are one step closer to making this fantastic future real," said JoeBen Bevirt, founder of Joby Aviation.

Joby Aviation wants you to be able to order an air taxi like you would an Uber by 2024.

And Wisk Aero is aiming to be the first company with FAA certification for its autonomous passenger air taxi.

But those are eVTOL aircraft, or electric vertical take-off and landing. They aren’t designed for a road like a car is.

Many visionaries in the industry believe this may be the best path for a flying car-like vehicle to eventually take off.