The History Of Paternity Leave? There Isn't Much 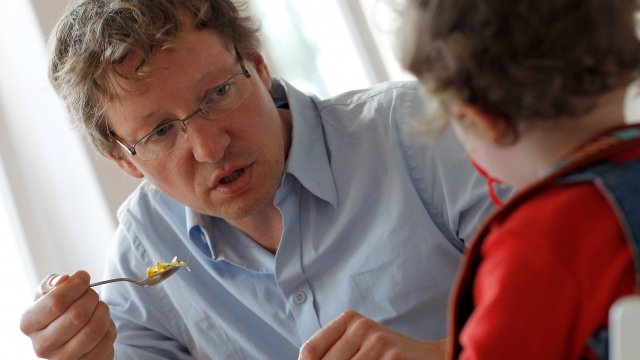 President Trump talked about paid family leave in his State of the Union, but we're still far from paternity leave being a norm.

Maternity leave is a longer story, dating back to the Industrial Revolution. Countries in Europe and elsewhere decided that paid maternity leave was necessary to make sure women could work and care for kids, notes a UCLA scholar.

Today, most countries have some type of paid family leave law — although dads don't always get equal benefits.

First, the outliers: Only eight countries don't have nationwide paid family programs. Seven of them, like the Marshall Islands and Micronesia, are far short of being economic powerhouses. The United States — the largest economy in the world — is No. 8.

What's The State Of Maternity Leave In America?

Legal protections for pregnant women in the U.S. are a relatively new development.

Many affluent nations are way more generous. Sweden, for example: 16 months of paid leave to be divvied up between the parents. Dads, it turns out, don't always take advantage of leave plans according to Atlantic magazine, so countries like Norway, Iceland, Germany and Finland are offering incentives. More money in some cases, or requiring new dads to use a certain portion of shared leave.

The idea is to make paternity leave just as commonplace in the culture, benefiting kids, dads, families and businesses. Back here in the U.S., many new dads aren't so fortunate.

Here's why: The Family and Medical Leave Act of 1993 was a major development. Qualifying men and women were granted up to 12 weeks of leave for a number of reasons, including a newborn or adoption. It applied to about 60 percent of workers at the time. The only thing? It was unpaid leave.

President Trump is talking about paid parental leave. He called for six weeks of leave in the 2017 budget and included a line in his recent State of the Union address, which, for now, has stalled out. That means most new parents are at the mercy of their employer.

Washington, D.C., is scheduled to roll out a plan in 2020 for eight weeks of paid leave for all new parents. But what about the rest of the country? Millions of new dads? Some companies are filling the gap, but even then there are disparities.

For instance, Entrepreneur profiled Google's benefits. A biological mom gets 22 weeks paid time off, whereas a primary caregiver — maybe a biological father or adoptive dad — 12 weeks. If the dad is the nonprimary caregiver? Seven weeks. Across the board, less than 20 percent of U.S. employers have paid paternity leave, according to a 2015 survey from the Society for Human Resource Management.

The same group found 58 percent of companies have some form of paid maternity leave, more than double what's available for men.