'Letter from Birmingham Jail': The injustice of silence 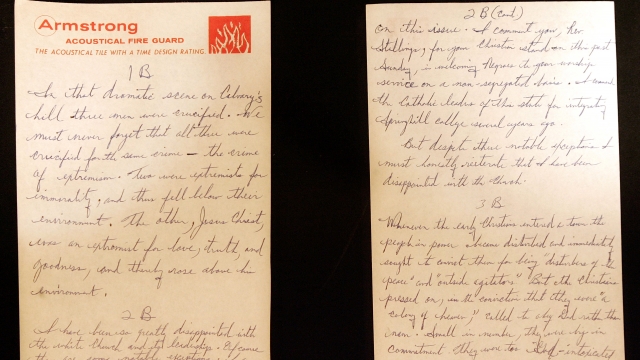 In his lifetime, Martin Luther King Jr. gave more than 2,500 speeches, but one of his most famous works didn’t take place on a stage with thousands of people but in the solitude of imprisonment.

In 1963, while jailed in Birmingham, Alabama, during anti-segregation protests, King penned the famous words, “Injustice anywhere is a threat to justice everywhere.”

Those words, written on scraps of paper, would later be called “Letter from Birmingham Jail,” and were written during a tipping point in the civil rights movement, according to American University Associate Professor Steven Taylor.

“I think Birmingham at that particular time was ground zero for the civil rights movement because so much was focused on there. It had the reputation at that time was considered the most segregated city in the United States,” said Taylor.

Biographer and author of the upcoming book “King: A Life,” Jonathan Eig says these words were a source of inspiration and condemnation and came at great difficulty for King.

“When he went to jail in Birmingham, it was certainly not the first time, but it was among the most frightening. And, you know, he really came to fear being alone in those cells because he didn't know what would happen to him when the world couldn't see him,” said Eig.

While the push for voting rights legislation may have failed in the Senate, Martin Luther King III says he plans to continue his father's mission.

The letter was addressed to fellow members of clergy who’d rebuked King’s approach.

“The backbone of ideological support for racial oppression and segregation came from the church. So that would be that the clergy persons would be the key individuals to address such a letter to,” said Taylor.

He also condemned the “moderate white” and their need for order above justice.

Those words went on to become the inspiration of King’s 1964 book “Why We Can’t Wait.”

“That letter was a challenge not just to the religious community, but to all of America. Stop asking us to wait. We are. We are here now to demand our rights,” said Eig.

“Two years later, when there was a push for a Voting Rights Act and you had the march from Selma to Montgomery, you saw clergy persons marching with their collars on,” said Taylor.

And while the focus is often on King’s almost poetic deliveries, it’s the words and their true meaning that matter most, written in stone some 60 years later.