The Intersection Of Climate Change And Homelessness 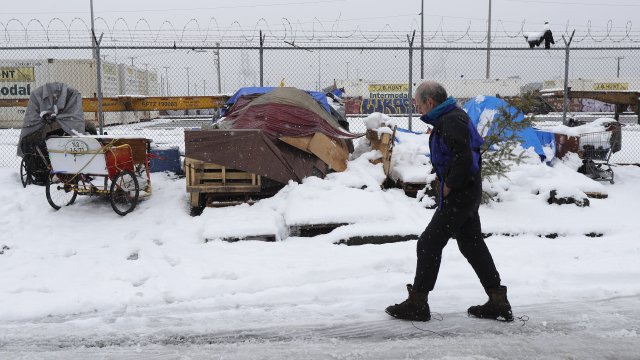 Drastic conditions brought on by climate change have impacted many people's home lives. But what about those who have no shelter from the elements?

In 2021, at least 688 Americans died from weather-related events, making it the deadliest year for major weather disasters across all 50 states since 2011. These deaths are mostly due to the winter storm that hit the south in February and extreme heat in the Pacific Northwest. Experts say these events are caused in large part by climate change.

These drastic conditions can have an impact on anyone, but what about people with no shelter from the elements at all?

According to federal data, the states with the largest absolute increase in homelessness between 2019 and 2020 were Texas, California and Washington, and that’s where many of these extreme weather events took place.

Studies show exposure to extreme heat and cold has a big impact on the life expectancy and quality of life among people experiencing homelessness.

During the February freeze in Texas, Valerie Salas was on the ground in San Antonio, making sure the people her organization serves were having their needs met during a very dangerous time for people without a home.

"The water was shutting off, electricity shut off, so we couldn't even get hotels because housed individuals were working all the hotels," said Valerie Salas, director of homeless services at Christian Assistance Ministry. "Now we're out of hotels. It was like barrier after barrier. We were just rolling with the punches, but we ended up getting a significant amount of homeless people into churches and shelters within that time"

While Salas and her organization were able to help a lot of people, she says it takes a lot of relationship building and trust building to help get everyone into shelter — and some people may still want to opt out.

"For the vulnerable ones with especially significant mental health issues, those are the ones that we really have to be mindful with to really encourage to get out and to come with us when it's going to be below that 30 degrees," Salas said. "I have a client last year that many of us have worked with who ended up losing his feet and toes on the other from frostbite."

On the other end of climate threats, over the summer, the Pacific Northwest saw record high temperatures reaching over 115 degrees. According to the Environmental Protection Agency, heat is actually the leading weather-related killer in the U.S., even though most heat-related deaths can be prevented through outreach.

That was the focus for a Portland-based day shelter for women and children as they saw the effects of the heat play out first-hand on people without homes.

"The first step is getting the word out both to our guests and to our donors," Liz Starke, development director at Rose Haven said. "We always put something big out just doing a collection for handheld fans, you know, water bottles. We were passing out rags that we were dipping in cool water, trying to get deliveries of ice, things like that. The whole community kind of has to come together to help our houseless neighbors."

Heat waves also aren't the only extreme weather event in the Pacific Northwest that has been made worse by climate change in recent years.

"In addition to the massive heat wave that we had last summer, you have to remember that like Oregon has the second highest rate of unsheltered folks, so these are folks that were literally outside for all of this," Starke said. "In addition to we have had way more ice storms and severe weather in that regard too, plus the wildfires, you know, summer of 2020... the air quality was the worst in the world in Portland."

Not only can climate change impact those experiencing homelessness — it can also create homelessness. Extreme weather events displace 20 million people worldwide from their homes each year.

John Mitchell is a content writer and editor at The Climate Reality Project and has written about the intersection of climate change and housing. He brought up an interesting point: As most Americans lack a substantial amount of savings, how can most people be expected to prepare for this?

So what are the solutions here? Of course, there’s solving the climate crisis, but until that happens, what are the best ways to help those experiencing homelessness stay safe from extreme weather?

More affordable housing options are part of that puzzle, but the folks who run shelters point out that sometimes making the transition from being unsheltered to having a stable home isn’t always easy.

"I can't tell you how common it is for people to finally get through the waitlist... they'll get a key to an apartment, and they won't be successful because they simply don't know how to live indoors anymore," Starke said. "It's isolating, it's scary, they're alone, they're used to living in communities."

The first step to helping people experiencing homelessness in many cases is building trust between people who need help and local area shelters.