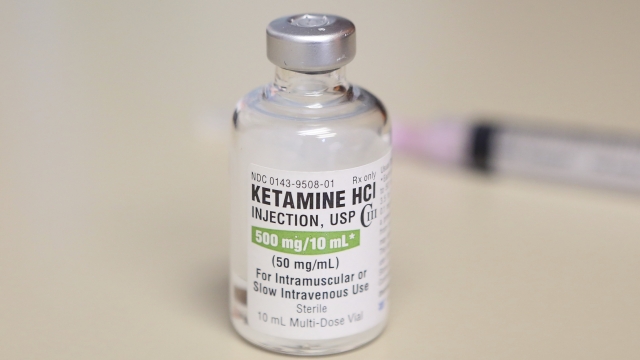 Research shows that when used in a controlled clinical environment, ketamine can have healing benefits.

Over the past 50 years, research on psychedelics has come a long way from a time when psychedelic albums ruled the charts and psychedelic drugs influenced American counterculture.

Today, research shows some of those same drugs are being used to help people escape a dark place.

Parr, of Houston, has long struggled with depression, and says for years she's been prescribed several different anti-depressants. When the pills failed her, she turned to talk therapy as the only treatment that helped; until she saw a documentary on psychedelic healing.

"I couldn't sit through the episode; I did watch the whole thing, but it took me two hours because I had to pause so often to sob. Watching their stories was very affirming. I thought, 'OK, I am sick,'" said Parr.

From there, Parr was recommended by her therapist as a candidate for ketamine therapy and says she's been benefiting from the sessions ever since.

"There were some moments with some emotional trauma that I have, and I was able to let that go during a ketamine session," said Parr.

Parr receives treatment at Field Trip Health in Houston, a Toronto-based psychedelic therapy company that has expanded in recent years with clinics in cities across the U.S.

"If the goal is to explore trauma, each session has its own value," said Dr. Michael Muench, who leads the Field Trip Health clinic in Atlanta.

During sessions, Dr. Muench administers the ketamine injections and checks the patient's vital signs, while a therapist helps ease the experience.

"So much about psychedelic therapy is about creating a container that feels safe. Part of feeling safe is feeling like what you're doing is legitimate, supported, and a good and healthy thing," said Dr. Muench.

The guided experience takes patients on a journey or "trip." In a dimly lit room, patients wear an eye mask and headphones; it's a comfortable space for them to address trauma and experience somatic release — something Parr says she experienced during her fourth session.

"It can be extreme laughing, extreme crying; it's a release of energy and feeling from the body," said Parr.

In 1999, ketamine became a schedule III non-narcotic substance with accepted medical uses. In 2019, the FDA approved a ketamine nasal spray for treatment-resistant depression, and now doctors and therapists use it regularly in a clinical setting. And while the DEA restricts many other psychedelics, researchers have found great benefits of substances like MDMA and psilocybin, or magic mushrooms.

Ketamine results may not be the same for everyone who struggles with depression, and while Parr says she will likely fight depressive symptoms for the rest of her life, the ketamine treatments, along with seeing a regular therapist, have given her a new outlook on life.

"It allowed me to find the pathway to such fulfillment in life and enrichment in my life," said Parr.

Dr. Muench says the benefits of four to six ketamine sessions can last about a month, with patients returning less frequently for maintenance treatments.

Researchers found ketamine is anywhere from 50% to 80% effective in improving a patient's mental health.