The Latest On Microsoft's HoloLens: Battery Life And Connectivity 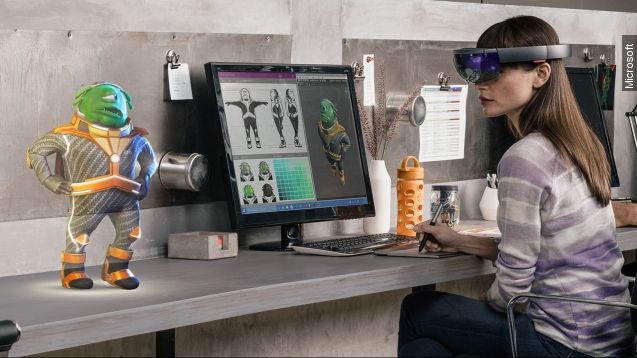 A Microsoft rep speaking in Tel Aviv has shed some new light on the device.

It's been a while since we last heard any new details about Microsoft's augmented reality headset, the Microsoft HoloLens.

But our dry spell has come to a end thanks to Microsoft rep Bruce Harris, who shared some more details about the device at an event in Tel Aviv. And let's just say our holographic future is looking a bit tethered for the time being.

Don't get us wrong, the HoloLens still runs independently of any other devices. Harris emphasized it functionally works like a Windows 10 PC, which can connect to other devices via Wi-Fi or Bluetooth.

But you might want to stay tethered to a power outlet while you use it: the HoloLens has an estimated battery life of 2.5 to 5.5 hours, depending on how much processing power you need. That's just enough time to watch James Cameron's "Avatar" on the high end, or type out a short story in low-power mode.

We also learned a bit more about the HoloLens' field of view, which has drawn some concern in early demos. Harris says using the device lets you view 3D projections as though you were looking at a 15-inch monitor from 2 feet away — so if you put on a HoloLens, this is about how much of your view will be augmented.

Both the battery life and the field of view could improve as Microsoft gets better at making the device, but that probably won't happen in the first retail iteration. (Video via IGN)

What will be present is the ability to link multiple HoloLenses together, potentially letting several different people participate in the same augmented experience.

Microsoft hasn't set a retail date for consumer versions of the HoloLens, but is selling development kits at $3,000 each.