Why Was Suspect In Canadian Stabbing Rampage On The Streets?

Myles Sanderson was released by a parole board in February while serving a a sentence of over four years on charges including assault and robbery.

As the manhunt dragged on for one of two brothers in the stabbing deaths of 10 people in Saskatchewan, the rampage raised questions Wednesday of why the suspect — an ex-con with 59 convictions and a long history of shocking violence — was out on the streets in the first place.

Canadian Police: 1 Suspect In Stabbings Has Been Found Dead

The discovery of the body came on the second day of a massive manhunt for the pair, who are suspected of carrying out a series of stabbings.

Myles Sanderson, 32, was released by a parole board in February while serving a sentence of over four years on charges that included assault and robbery. But he had been wanted by police since May, apparently for violating the terms of his release, though the details were not immediately clear.

His long and lurid rap sheet also showed that seven years ago, he attacked and stabbed one of the victims killed in the weekend rampage, according to court records.

Canadian Public Safety Minister Marco Mendicino said there will be an investigation into the parole board's assessment of Sanderson.

“I want to know the reasons behind the decision" to release him, he said. “I'm extremely concerned with what occurred here. A community has been left reeling."

Sanderson and his brother Damien, 30, are accused of killing 10 people and wounding 18 in a string of attacks across an Indigenous reserve and in the nearby town of Weldon. Damien was found dead Monday, and police were investigating whether his own brother killed him.

Investigators have not given a motive for the bloodshed.

The Saskatchewan Coroner’s Service said nine of those killed were from the James Smith Cree Nation: Thomas Burns, 23; Carol Burns, 46; Gregory Burns, 28; Lydia Gloria Burns, 61; Bonnie Burns, 48; Earl Burns, 66; Lana Head, 49; Christian Head, 54; and Robert Sanderson, 49, One was from Weldon, 78-year-old Wesley Patterson. Authorities would not say how the victims might be related. 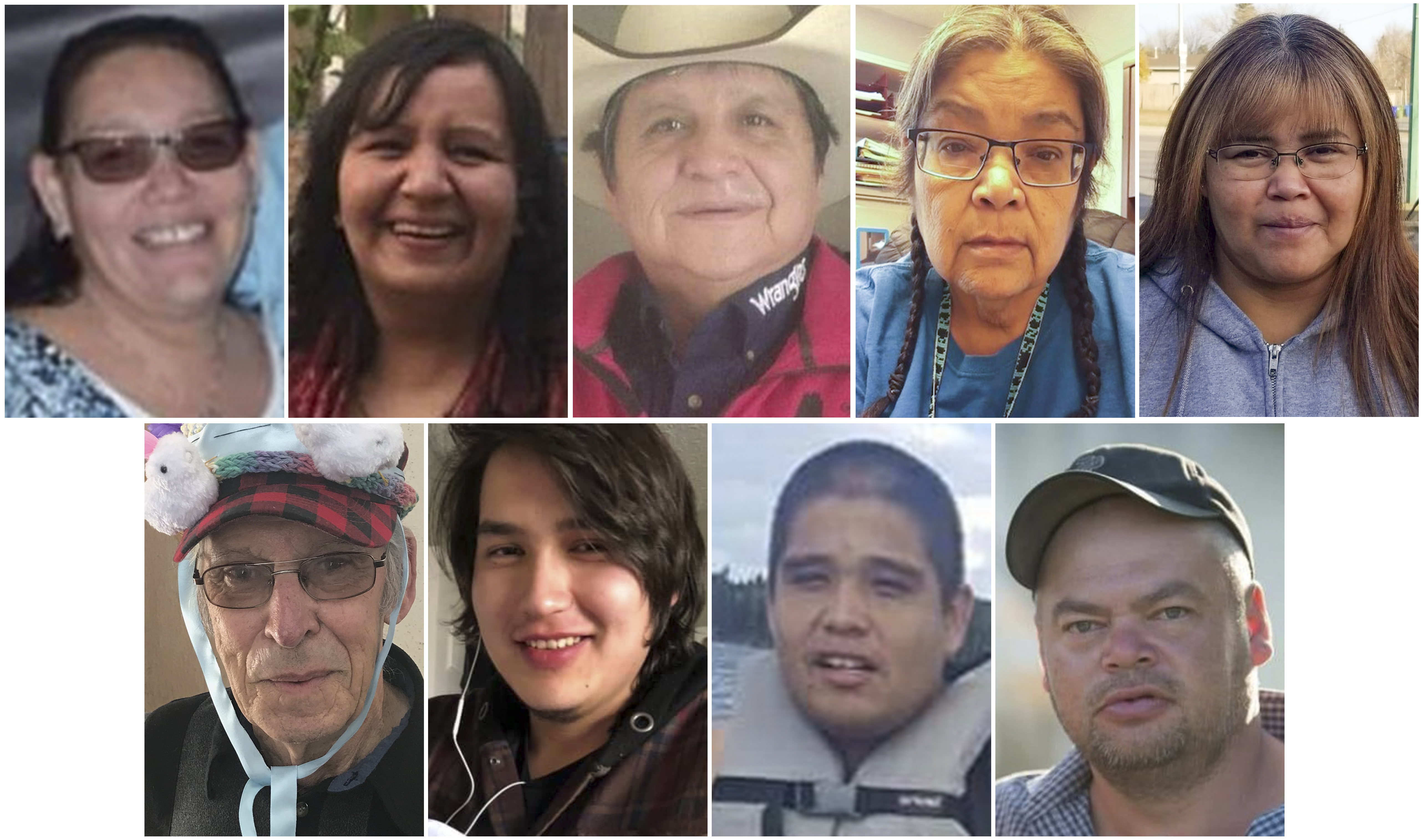 Mark Arcand said his half sister Bonnie and her son Gregory were killed.

“Her son was lying there already deceased. My sister went out and tried to help her son, and she was stabbed two times, and she died right beside him,” he said. “Right outside of her home she was killed by senseless acts. She was protecting her son. She was protecting three little boys. This is why she is a hero.”

Arcand rushed to the reserve the morning of the rampage. After that, he said, “I woke up in the middle of the night just screaming and yelling. What I saw that day I can’t get out of my head." But he said he doesn't know why it happened.

Many of Sanderson's crimes were committed when he was intoxicated, according to court records. He told parole officials at one point that substance use made him out of his mind. Court records showed he repeatedly violated court orders barring him from drinking or using drugs.

Canada's Indigenous communities are plagued by drugs and alcohol.

“The drug problem and the alcohol problem on these reserves is way out of hand," said Ivor Wayne Burns, whose sister was killed in the weekend attacks. “We have dead people and we asked before for something to be done.”

Myles Sanderson's childhood was marked by violence, neglect and substance abuse, court records show. Sanderson, who is Indigenous and was raised on the Cree reserve, population 1,900, started drinking and smoking marijuana at around 12, and cocaine followed soon after.

In 2017, he barged into his ex-girlfriend’s home, punched a hole in the door of a bathroom while his two children were hiding in a bathtub and threw a cement block at a vehicle parked outside, according to parole documents.

He got into a fight a few days later at a store, threatening to kill an employee and burn down his parents' home, documents said.

That November he threatened an accomplice into robbing a fast-food restaurant by clubbing him with a gun and stomping on his head. He then stood watch during the holdup.

In 2018, he stabbed two men with a fork while drinking and beat someone unconscious.

When he was released in February, the parole board set conditions on his contact with his partner and children and also said he should not enter into relationships with women without written permission from his parole officer.

In granting Sanderson “statutory release,” parole authorities said: “It is the Board’s opinion that you will not present an undue risk to society."

Canadian law grants prisoners statutory release after they serve two-thirds of their sentence. But the parole board can impose conditions on that freedom, and inmates who violate them -- as Sanderson did more than once -- can be ordered back to prison.

Mendicino, the public safety minister, said authorities have to make sure nothing like this happens again.

“It’s incredibly important that when someone is at large and there’s a warrant for their arrest, and they have an extensive criminal background, that all the resources are there to be able to apprehend that person as quickly as possible,” he said. “We do need to take a very careful look at what occurred.”