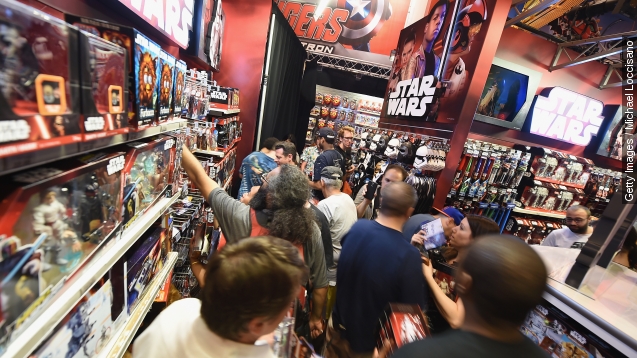 With all they hype surrounding the new "Star Wars," companies are desperate to attach their name to the release, which has produced mixed results.

You’ve probably heard there’s a new "Star Wars" movie coming out. And while it's expected to be a huge box-office success for Disney, the "Star Wars" universe will make a good chunk of its money outside of ticket sales.

Because as we all know, sequels lead to anticipation. Anticipation leads to hype. Hype leads to insufferable merchandising. (Video via Toys R Us)

The New York Post reported Disney will make more than $5 billion from officially licensed "Star Wars" merchandise. Of course, you have the standard toys and action figures, but Lucasfilm is going a little overboard with some of the strangest and most obscure official products in cinema history.

They range from inspired call backs to the original trilogy like a tauntaun sleeping bag from "The Empire Strikes Back." (Video via 20th Century Fox)

To the laughably bad like these "The Force Awakens" crocs.

But before you think being a "Star Wars" fan can’t be fashionable, Kay Jewelers is offering "Star Wars" charm bracelets and CoverGirl has a line of beauty products including lipstick, nail polish and mascara to accentuate your inner Sith or Jedi.

While all the "Star Wars" inspired commercials certainly seem like overkill, this is nothing new for the franchise. (Video via Dodge)

The prequel trilogy had plenty of its own product missteps, we're looking at you Jar Jar Binks Pez dispenser, but for as long as there’s been a galaxy far, far away, there’s been awful merchandise to go with it.

Early "Star Wars" fans could get their hands on plenty of novelty items like a Lando Calrissian mustache.

And, in possibly the most '70s-era thing of all time, there’s a disco album of remixed "Star Wars" themes called "Star Wars and Other Galactic Funk," which featured a number one single in 1977.

So, maybe part of the fun of "Star Wars" is all of the cool, and sometimes bizarre, goodies that come with each new film. (Video via Kellogg's)