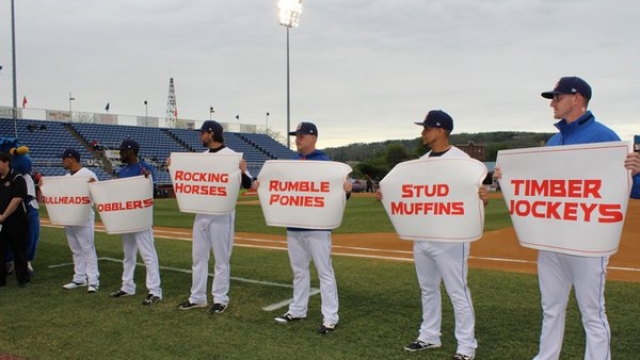 The Binghamton Mets are looking for a name different from their Major League affiliate, and they have some interesting choices.

The Binghamton Mets are having an identity crisis. The baseball team is the AA affiliate of the New York Mets. But now it needs its own name and mascot, since Binghamton isn’t exactly a metropolitan area.

So the team is leaving it up to fans — and the internet at large — to select a new name. Fortunately, Binghamton provided us with six incredibly bizarre choices for a professional sports organization, each of which honors its home city.

There’s the Bullheads for the local bullhead catfish population, and the Gobblers for the turkey hunting you can do in the area. And that’s where this goes from unusual to hilarious.

The next four suggestions all celebrate Binghamton’s title as the "carousel capital of the world." There’s the Rocking Horses, followed by the Rumble Ponies, the Stud Muffins and the Timber Jockeys. Don’t worry, we’ll explain.

A Rumble Pony is described as a "herd of fierce horses that no carousel center pole can contain," and a Timber Jockey is someone riding a carousel.

Stud Muffin apparently refers to the "collection of carousel horses owned by Binghamtonians." That one seems like a bit of a stretch. But hey, the Stud Muffins would probably have a huge rivalry with fellow AA squad the Montgomery Biscuits.

It was probably a smart move by Binghamton to provide a set list of names before soliciting votes, otherwise it probably would’ve ended up with Basey McBaseface for a mascot.

If you’re as excited as we are about the prospect of a baseball team named the Rumble Ponies, you have through June 1 to cast your ballot.