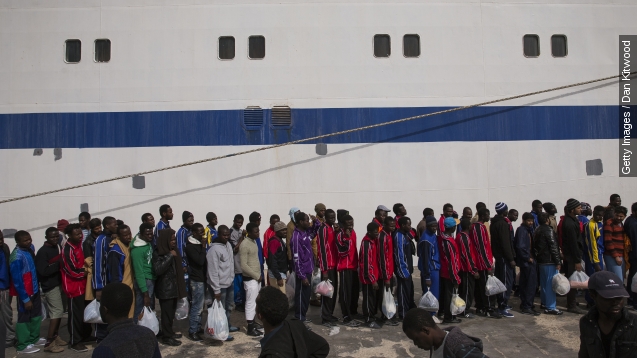 The British government is at odds with the EU over what to do about migrants crossing the Mediterranean, scores of whom have died.

The U.K. has opted out of the European Union's plan for accepting some 20,000 refugees over two years, and instead, the country's Conservative leadership says it wants what it calls economic migrants sent back — with or without their consent. (Video via ODN)

"With the state of the eurozone who has got the jobs, who has got the ability to deal with them, and why should we be encouraging human trafficking on this vast scale because that is what the current situation is allowing," Lord Michael Dobbs told the BBC.

But sending migrants back against their will is something the EU foreign policy chief Federica Mogherini has said the EU won't do. (Video via Sky News)

Accepting asylum-seekers is one area that has caused — and will probably continue to cause — friction between the U.K. and the EU.

Factor in the fact that the U.K.'s unemployment rate is less than half that of France and Italy's, and you could make the argument the country isn't pulling its weight.

But renegotiating the terms of the U.K.'s membership in the E.U. is one of the newly elected Conservative government's focuses going forward. And given its decision to opt out of the E.U.'s migrant quotas, it doesn't look like the U.K. will be taking more refugees any time soon. (Video via CBC)

Already this year, close to over 1,800 migrants have died trying to cross the Mediterranean, compared to about 200 this time last year. (Video via Channel 4)