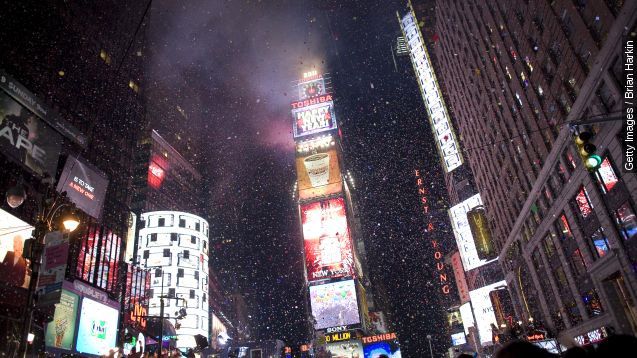 There's the funny glasses, the champagne, the pressure to find someone to kiss, the dramatic countdown and finally ... the ball drops and it's a brand new year.

It's estimated more than one billion people worldwide tune in to watch that massive ball slide down the pole on New Year's Eve when the clock strikes midnight. But why do we do it?

It turns out a ball drop is a really outdated way to tell time. Time balls were created in the early 1800s to help sailors keep track of the precise time of the day.

Soon, people all over started using time balls to set their clocks. Including people in New York City, the home of the famous New Year's Eve ball drop.

That tradition dates back to 1907. The first New Year's Eve Ball was lowered on a flagpole on top of the building where The New York Times was headquartered. The ball was 700 pounds, made of iron and wood and was covered with 100 lightbulbs.

But according to The New Yorker, the ball-drop was a back-up plan. Originally, the owner of the Times wanted to set off a giant fireworks display instead, but the city wouldn't issue him a permit.

Fast-forward to 2015 and the ball has been through seven different renovations. The version we see today is a massive 11,875 pounds. It's covered in more than 2,500 Waterford Crystals and is illuminated by more than 32,000 LED lights. (Video via Times Square NYC)

Its permanent home is atop the One Times Square building. It sits ready and waiting all year long until Dec. 31 rolls around again. And just like clockwork, the ball starts its 141 foot descent at 11:59 p.m. and 60 seconds later, a new year has officially arrived.