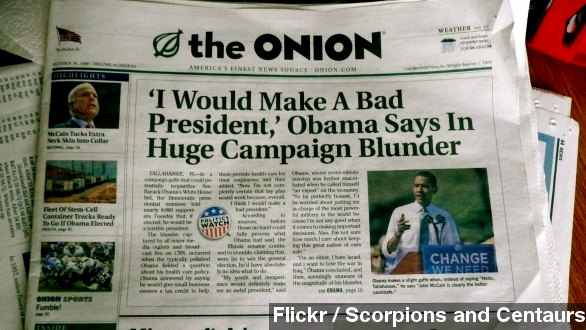 Satirical news outlet The Onion announced Friday it will no longer publish the printed editions of its mock news.

Since its founding in 1988, The Onion has grown from a free weekly newspaper to a comedic media empire thanks to its unique brand of satirical journalism. (Via The Atlantic)

Today the mock newspaper is only sold in three cities, and it seems The Onion's shutting down its printing presses for good.

Crain's Chicago Business first reported The Onion's Dec. 12 print edition would be its last. The newspaper's president Mike McAvoy said "It's sad to see a print edition no longer exist, but it's important to see the Onion succeed."

But if the paper's July obituary for the printed word is any indication, this shift was inevitable. (Via The Onion)

The satirical paper has been steadily adapting to the digital age by producing video content and speeding up its online news cycle. (Via The Onion)

And a Slate article notes the Onion's newsroom culture has changed over time as well.

"In every way that matters, the people who produce the Onion now think of it as a website, not a paper. ... The Onion now works just like the news organizations that it's making fun of. In some ways, that's part of the joke."

So despite the loss of its print edition, The Onion will continue to publish its trademark, inimitable satire online. Which didn't stop some news outlets from trying to imitate the style while reporting the news.

Vanity Fair has a list of the best worst parodical coverage of The Onion's print demise, including Slate's "Area Newspaper Ends Its Mass Genocide of Trees,"​ and ABC's earnest "No Joke!" headline.

And then there's this snarky little number from WBBM sarcastically blasting The Onion for abandoning Chicago's thriving print industry. Ouch.

At its peak, the print version of The Onion was distributed in 17 markets.