Philippine Drug War Could Have Devastating Effects On HIV Prevention 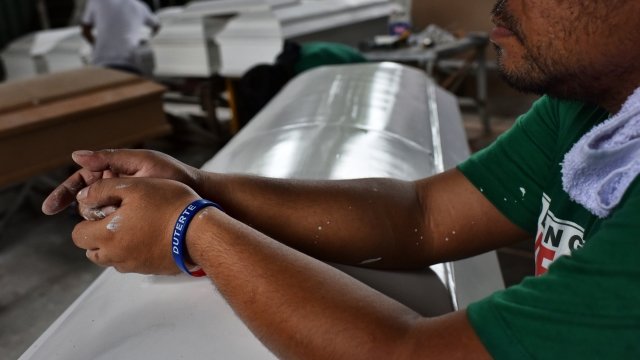 Drug users in the Philippines are reportedly avoiding HIV prevention programs because they're scared of implicating themselves.

Beyond extrajudicial killings and the deaths of innocent bystanders, the Philippines' drug war may have a new unintended side effect: disease.

On Friday, The Washington Post published a report that said illegal drug users are avoiding disease prevention programs out of fear of law enforcement. Those programs include clean needle exchanges and testing services for diseases like HIV.

That could have a devastating impact on public health. According to the Joint United Nations Programme on HIV/AIDS, the Philippines has the fastest-growing HIV epidemic in Asia and the Pacific. Illegal drug users avoiding disease centers could soon make the issue difficult to track.

Chicago filmmaker Ben Kurstin collected more than 8,000 drug bags in two years and turned them into giant works of art.

The World Health Organization wrote in 2004 that access to sterile needles and syringes for injecting drug users is fundamental to HIV prevention. The organization adds that needle syringe programs can further encourage drug treatment and health care.

Though many still fear law enforcement, more than 700,000 drug users and pushers reportedly "surrendered" themselves to authorities last year. Some were sent to rehabilitation programs — one of which had participants build coffins for victims of the drug war.

Other programs reportedly include "community-based livelihood programs," like organic farming and livestock raising, as well as residential rehab centers.

The Philippine House of Representatives is working on funding the construction of more rehab centers. One representative said: "We do not view drug users as criminals, but as persons who are sick and need to be treated."