The President's Options Are Limited To Help Gas Prices 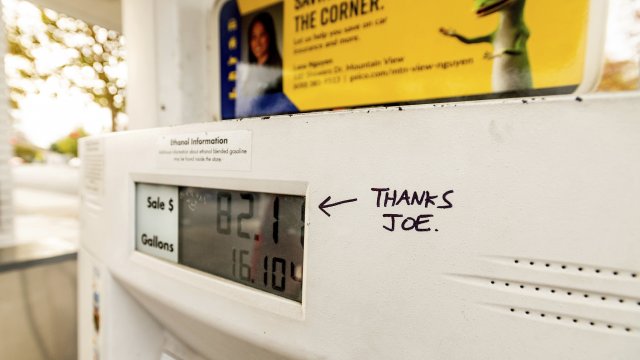 "He's gone after OPEC and asked them to increase. They said they will not be doing that," said Energy Secretary Jennifer Granholm.

Another brutal week for drivers.

"There is a huge increase in demand. The supply has not caught up," said Lynda Lambert,  spokesperson for AAA East Central.

The national average — still near $3.50 a gallon. California setting a record, with many stations north of $5 a gallon.

"It looks like as long as crude oil prices stay above $80 a barrel we will still be dealing with higher gas prices," said Lambert.

Crude oil prices, supply chain slowdowns and high demand are keeping a stranglehold on the pockets of American drivers.

"The president is all over this," said Energy Department Secretary Jennifer Granholm.

Granholm — admitting the administration's tools are failing so far:

"He's gone after OPEC and asked them to increase. They said they will not be doing that," said Granholm.

But as a holiday travel rush approaches, there's little sign of the pressure waning.

AAA recommends Americans do what they can to burn less gas: keep your tires properly inflated, take out any unnecessary weight you're hauling around, avoid accelerating too quickly, commute around rush hour if you can, and use cruise control on the highway.

"This is the first time in my eight years that I've seen it to this extent," said Dave Hardy, a Cleveland business executive

The prices – hitting business where it hurts. Like at this Cleveland package delivery company.

"There's a trickle-down effect. There's certainly a domino effect to what's going on in our industry, and the customer ends up suffering a little bit," said Hardy.

Another casualty of upheaval, driven by a once-in-a-century pandemic that upended our economic blueprint.