The Primetime Emmy Awards' Most Epic Records And Streaks 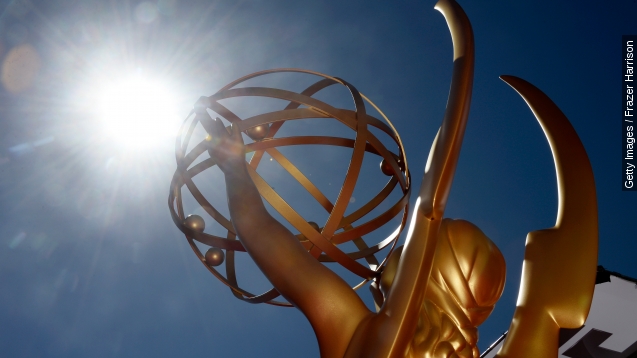 Here's a look at some of the biggest records set over the 67-year history of the Emmy Awards.

Sixty-six years later, the award show is only open to nominees and members of the Television Academy. Tickets for guests of nonmember nominees for the telecast cost $500.

This year, HBO set the record for most nominated network in one year with 126 nominations.

It can thank "Game of Thrones" for 24 of those.

But the drama with the most nominations ever in one year is still "NYPD Blue" with 27.

"30 Rock" is the most nominated comedy series ever in just one year with 22 nominations in 2009.

"Saturday Night Live" is the most nominated show in Emmy history with 193 nominations since 1976.

But what about all of those unlucky nominees?

Like Kevin Spacey, Amy Poehler and Don Cheadle — none of whom have ever won an Emmy for acting.

Angela Lansbury takes home the prize, though, for most acting Emmy nominations without ever winning.

She's been nominated 17 times, 12 of which were for outstanding lead actress in her drama series "Murder, She Wrote."

While Jon Hamm holds the record for most acting nominations without a single win for an actor.

Over his career, he's been nominated 12 times for acting — two of which are this year for "Mad Men" and "Unbreakable Kimmy Schmidt."

But what about the lucky few?

That honor goes to Hector Ramirez, a cameraman who's been nominated 74 times. This year, he's up for outstanding technical direction for both "Dancing with the Stars" and "The Kennedy Center Honors."

Although, President of HBO Documentary Films Sheila Nevins has Ramirez beat when it comes to the most Emmy wins. She's won 29 of her 71 nominations so far. (Video via The New Yorker)

Make sure to tune in to the 67th Primetime Emmy Awards Sept. 20 on Fox to see if any of these records are broken.