The Push To Get Rid Of Gender-Targeted Marketing In Toys 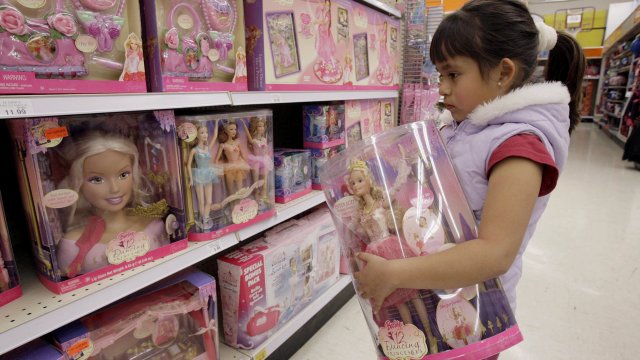 Gender-targeted toy ads have ebbed and flowed throughout history, and now, companies are trying to stop the stereotypes.

In the '80s and '90s, ads showing boys with toy trucks and girls playing with dolls were a fixture on TV.

Sociologist Elizabeth Sweet says the concept of boy vs. girl toys has ebbed and flowed throughout history.

Gender-targeted toy ads accelerated in the 1920s and began to fade again by the 1970s.

"There were examples of toys that defied gender stereotypes," Sweet said. "Boys shown with kitchen sets and girls shown building and boys and girls playing together a lot in the advertisements."

By the 1990s the targeted ads had returned.

Megan Perryman of the U.K.-based Let Toys Be Toys says she noticed the power of those targeted ads on her own child.

"I can remember going into a shop where my daughter learned to read and suddenly her saying, "I don't want this boy's toy," Perryman said.

She now works to get rid of gender stereotypes in toy stores. So far, her group has convinced most U.K. retailers to drop the boy and girl labeling from their stores and websites.

"To say 'construction toys' as opposed to 'boys' toys' is not harm," Perryman said. "The retailer is not harmed. It has actually allowed children and parents to find the toys they're looking for, and it's been really successful."

Bringing this concept fully to the States has taken some time. In 2015, retail giant Target did away with the traditional pink and blue, boy or girl, toy aisles in stores. But it didn't happen without significant pushback, with Fox News saying, "God made us male and female ... and to think that we are gender-neutral is just foolishness."

But the pushback remains, with some saying it may have to do with the idea that promoting equality in toys is also a way to push for a more nonbinary and gender-nonconforming society.

In 2019, Mattel introduced its first gender-free doll collection, which the company says isn't about gender politics but inclusivity.

And while some pushback may be cultural, Sweet says some of it may have to do with Americans' desire to maintain a sense of freedom.

"People have a hard time with the idea that corporations need to be regulated, that they can't be just left to the goodness of their own hearts to do what's right for kids," Sweet said.

Regardless of the objections, changes are happening even if it starts with the toy makers themselves.

Recently Lego made a promise to make sure their toys are more inclusive after research showed 76% of parents said they would encourage Lego play to a son vs. 24% to a daughter.

"This call for getting rid of gender stereotypes isn't a new thing," Sweet said. "This is much more about going back to the way that we used to do things."