The Queen's Speech: Now This Is How You Do Pageantry 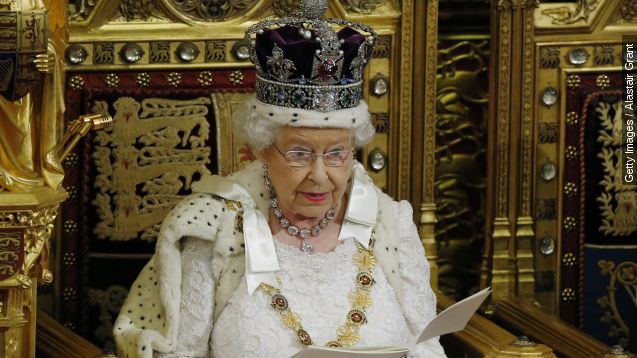 It wouldn't be a royal speech to Parliament without some horse-drawn carriages and a hostage situation. The queen's 2015 speech definitely delivered.

When it comes to their royals, the British aren’t ones to skimp on tradition. On Wednesday, Queen Elizabeth didn't disappoint. (Video via U.K. Parliament)

For all you non-Brits, here's a guide to the glorious pomp and circumstance surrounding her annual speech to Parliament.

As she does every year, the queen is escorted by the Household Cavalry from Buckingham Palace to Westminster in a horse-drawn carriage. (Video via BBC)

But first — as a precautionary measure — the Yeomen of the Guard conduct a ceremonial search of Westminster’s cellars — for gunpowder presumably. (Video via BBC)

And in keeping with tradition, a member of Parliament is held hostage at Buckingham — some leverage to ensure the queen's safe return.

Now, upon her majesty's arrival to Westminster in her Diamond Jubilee State Coach, she throws on the Imperial State Crown — along with a special velvet robe — and heads to her gilded throne. (Video via BBC, U.K. Parliament)

Per tradition, the door is first slammed in his face — a not-so-subtle reminder of the House of Commons’ independence from the monarchy. (Video via BBC)

Not since 1642 when King Charles I tried to arrest five members of Parliament has a monarch set foot in the Lower House.

But back to the Black Rod. To gain admittance, he knocks not one, but three times. (Video via BBC)

"Mr. speaker, the queen commands this honorable house to attend her majesty immediately in the House of Peers," the Black Rod said.

And now, the moment we've all been waiting for. (Video via U.K. Parliament)

"My lords and members of the House of Commons, my government will legislate in the interests of everyone in our country," Queen Elizabeth II said.

If the Queen sounds bored, that’s kind of the point. To indicate her neutrality, she reads the speech in monotone. Not a word of which, by the way, she wrote herself. David Cameron's government penned it. The speech — her 62nd — ran just over eight minutes.

"I pray that the blessings of almighty God may rest upon your counsels," Queen Elizabeth II said.

And with that, the queen made her grand exit, and the lawmakers went to work debating the policies and proposed legislation.

So really, the whole affair isn't unlike the president's State of the Union address. You know, minus the horse-drawn carriage and men in funny hats. If only.

This video includes images from Getty Images, Policy Exchange / CC BY 2.0, Trelleek, Andrew Gatt / CC BY 2.0. and music from the U.S. Navy.