The Road To The 19th Amendment 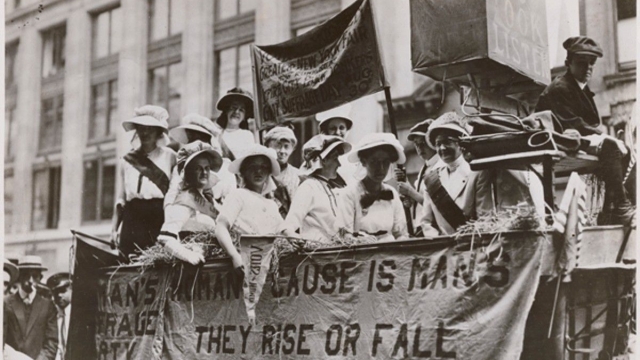 It's been 100 years since the 19th Amendment was ratified. Newsy takes a closer look at the decades-long movement for women's suffrage.

The 19th Amendment gave women the right to vote in 1920. But the fight for women's suffrage started decades earlier.

Dr. Martha Jones: "Many of the early womens' rights advocates in the United States begin their political lives as anti-slavery activists. … But within that movement, they begin to rethink their own position through the kinds of universal claims of human equality that undergird a movement like the abolitionist movement."

Hundreds of people gathered in Seneca Falls, New York, for the first U.S. women's rights convention in 1848. It was organized by Lucretia Mott and Elizabeth Cady Stanton. While she was there, Stanton drafted a document called the Declaration of Sentiments.

Modeled after the Declaration of Independence, it reads in part, "We hold these truths to be self-evident: that all men and women are created equal."

Dr. Colleen Shogan: "The most controversial aspect of the document, however, was the notion that women should have the right to vote. And the convention was very much divided on that topic because many women who attended the convention thought that was too radical."

The resolution was ultimately adopted after abolitionist Frederick Douglass — who was attending the convention — argued that it was necessary.

But leaders of the movement weren't always in agreement on what type of suffrage they were fighting for.

Jones: "Elizabeth Cady Stanton by the 1860s will take the position for a time that educated suffrage is the way forward. And by that, yes, she means white women should have the vote first. … But she is met with a great deal of opposition. Folks that don't believe the vote should be arbitrated further."

For a while, women waged state-by-stage campaigns to achieve their goal. Wyoming was the first to grant women the right to vote in 1869 when it was still just a territory. And others soon followed.

But with their sights set on a federal amendment, the movement changed tactics after the turn of the century.

Shogan: "The first real protest march in Washington, D.C., is the day before Woodrow Wilson's inauguration in 1913 with this huge suffragist parade. ... It's in 1917 where women start to first protest in front of the White House."

President Wilson was initially against giving women the right to vote. But his opinion started to change during World War I.

Shogan: "Wilson starts to talk a lot about the importance of democracy, and the role of the United States in protecting and preserving democracy all across the world. But yet, there wasn't a true democracy at home when half the citizens of the United States were not able to vote. … So Wilson's words start getting used against him in very emphatic ways."

At this point, Congress had debated a possible constitutional amendment for decades. But the Susan B. Anthony Amendment finally passed both chambers in 1919 with Wilson's help. The states still needed to ratify the amendment.

But ultimately it was Tennessee — a Southern state — that tipped the balance in favor of the suffragists, crossing the three-fourths threshold the amendment had to pass to become law on August 18, 1920.

More than 8 million women cast their votes for the first time later that year.

And now, more women show up to the polls than men each presidential election. In 2016, almost 74 million women cast their vote for president.