The Internet Can Be Used To Empower — Or Silence — Mass Protests 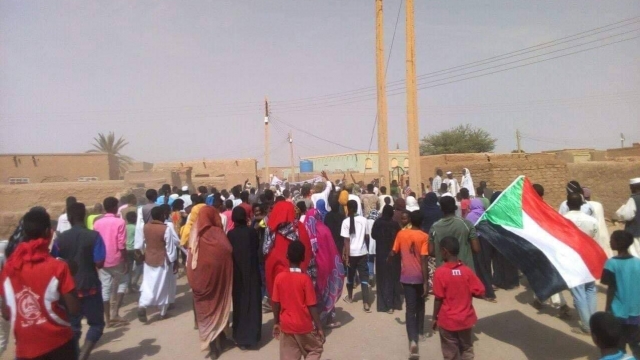 Protesters in Sudan are relying on social media to get word out about their fight. The government there is trying to black out their access.

Since December, protesters have gathered in Sudan to demand better economic conditions and call for the country's long-standing president to resign. The way protesters have organized and gotten their message out is similar to many other protest movements around the world: the internet.

The Sudanese government, like others before it, has shut down the internet as a method of gaining control. While internet shutdowns can be widespread enough to block the whole web, Sudan's government has keyed in on blocking social media platforms.

"The minute that people were on the streets protesting the first response, of course other than shooting and dispersing protesters, the second response to that was shutting down social media platforms," said Berhan Taye, lead of Keep It On.

That's Berhan Taye. She works as a part of a collective called Keep It On, a campaign aimed at fighting internet shutdowns.

"Two, three, four years ago, governments used to shut down the whole internet, or whole social media platforms will be blocked. But now, recently we've seen more targeted shutdowns, so this will be, for instance, what we've seen in Venezuela's government shutdown or blocked access to Twitter, Facebook and other live-streaming platforms for a specific speech that was being made. So they didn't block it for the whole day, just 12 minutes to make sure [people] don't hear a specific program or specific speech. That's quite targeted, so that means you have to be looking at the internet 24/7 [to] figure out what is happening at that particular time," Taye said.

Internet shutdowns pose a challenge to protesters, but they don't always mean it's impossible for protesters to get online.

"There's no internet until we use the VPN. There's a few people who take out their phones and record a video, a live video in Twitter, Facebook, Instagram, all over the social media, just to record these things to the world," Abdalla said.

A VPN, or a virtual private network, can let users access websites that are blocked in their area by making their IP addresses private.

"Some of our challenge is that when a whole internet shutdown happens, then VPNs won't be able to happen because your whole network is off the grid," Taye said.

Taye admits there isn't a perfect solution to this issue. But a start is further involving the tech community to brainstorm solutions and ensuring internet providers are aware of their rights if a government asks them to turn off access.

But for free speech advocates, shutting down internet access signals something larger.

"It's about people's human rights, people's liberation at the end of the day. We see internet shutdowns being an extension of traditional means of censorship. ... The reason why censorship happens is to control information, to control the narratives," Taye said.

Governments often cite safety concerns and national security as reasons for internet shutdowns. But Taye says actually engaging with governments is a part of the solution because when the internet is shut down, everyone loses.

Taye said: "Governments lose a lot of money when they shut down the internet, and we're at an age where we're talking about our economy. And any of these countries that shut down the internet, they invested millions of dollars in their infrastructure. So just switching that off just because something has happened can't be sustainable solution."

So far, dozens of people have died in the Sudan protests — human rights groups and those on the ground put that number as high as 51. But even through deaths and internet shutdowns, some are prepared to keep rallying.

"So you're willing to risk your own safety, to see change?" Newsy's Melissa Prax asked.

Abdualla answered: "I'm willing to do that. And it's not just me. All of the protesters that went out, they are facing that risk."