The Science Of Santa Claus 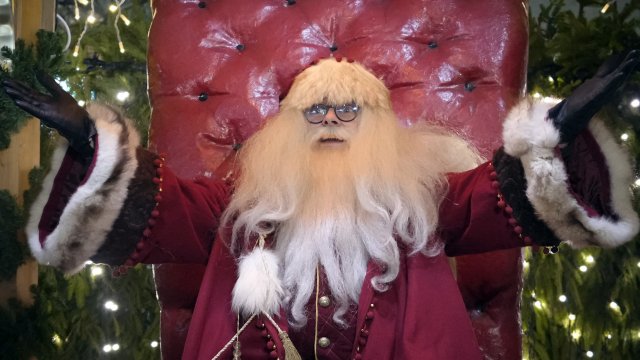 Have you ever wondered how fast Santa needs to fly to deliver gifts to the world, or even how Santa can safely withstand traveling at such a high speed?

Whether you're a curious child or an inquisitive adult, you may have wondered at one point: How could Santa deliver presents to every kid on Earth?

Bruce Hall is a long-time children's book author, and his latest book, "Super Santa: The Science of Christmas," attempts to answer every question about the hypothetical "science" behind Santa.

"We all know that Christmas has a lot of magic to it, but 'Super Santa' delves into the science behind it," Hall said. "Here's what Santa's suit looks like underneath the red. I mean, that's some heavy duty stuff there for him to be able to withstand all those pressures."

From questions like how far does Santa need to travel, how fast does Santa need to go, to even how many cookies can we estimate Santa eats during his trip — Hale answers all of those hypotheticals in ways kids can easily understand, but real-life scientists have been doing the calculations for years.

In 1998, a physicist from Purdue University calculated that Santa would need to travel around 100 million miles in order to deliver presents to the two billion children in the world.

In 2012, an aerospace engineering professor from North Carolina State University estimated that if Santa needed to reach about 75 million homes by Christmas Day, he would need to travel more than five million miles per hour.

"So imagine when you're traveling that fast, there's all this force pushing on you, and it would be like several Empire State Buildings crushing you down," Hale said.

Along the way, Santa eats 400 million cookies and drinks 200 million glasses of milk in one night — another Christmas nugget in Hale's book that makes all of these dense mathematical calculations a little more kid-friendly, with a goal of helping families engage with their children’s curiosities.

"It's a really cool way to extend children's imaginations, but at the same time, remind them of how magical Christmas is," Hale said.

Whether it’s science or magic or both, the curiosity surrounding Santa Claus knows no bounds.