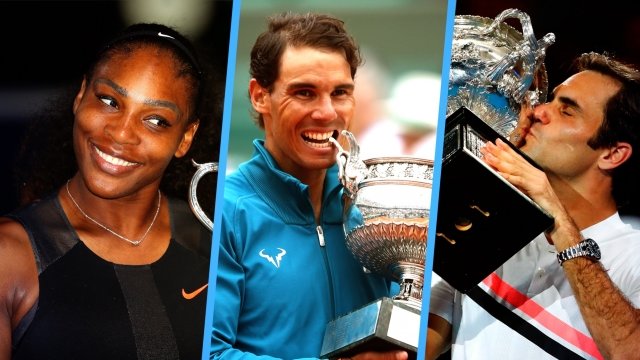 The aging trend is not restricted to Serena Williams, Federer, Nadal and Djokovic. It's widespread and happening both in men's and women's tennis.

I like to think that I'm a decent enough tennis player. But I'm 28 years old, so you're probably thinking my best years are behind me. Incorrect! Just look at two of tennis' all-time greats – Serena Williams and Roger Federer. They are 36 and 37 respectively, and still big-time favorites. And it's not just them: Venus Williams, Rafael Nadal and Novak Djokovic are all in their 30s. So actually, I've got tons of time.

I explored some of the theories floating around with Mark Ardizzone. He's been the head coach of the DePaul University women's tennis program for more than 20 years. And his coaching has led the Division I squad to reach the NCAA Championship four times in the past eight years.

NEWSY'S BEN SCHAMISSO: It's undeniable that professional tennis players are getting older, especially in the top 10 of men's and women's tennis. Why?

MARK ARDIZZONE: There's a lot of factors. There's so many different things that have happened in the last 15 years: the technology, the rackets have changed, which, to be quite honest, makes it easier to play as you get a little older. The nutrition has changed, the fitness has changed. The game of tennis hasn't really changed – there may be a little bit of tactics and style, but it's all this stuff surrounding the sport that has changed, and it's kind of led to this unbelievable golden age of all these great players that are now in the 30s, and it's just created this little older vacuum, and it's made it hard for the younger kids to break through.

SCHAMISSO: Tennis is also at a golden age when it comes to prize money, when it comes to sponsorship. When you have that much money available to you, you can afford to pay a team of physical therapists, nutritionists, coach, assistant coach. Maybe that's one of the reasons why they stay at the top?

Are These Rule Changes What It Takes To Get Young People Into Tennis?

The men's tennis tour is trying out must-win points and shorter sets in a move to attract younger viewers.

ARDIZZONE: Once you win and you get to be No. 1, when you have the physio, the coach, the trainer, the assistant, the entourage with you to keep you at that level, to kind of keep pushing you to go forward. That's where I think the longevity and the maintaining power comes from.

SCHAMISSO: When you are Serena Williams, Rafa Nadal, Roger Federer, you have won so many Grand Slams, if you lose the first set 6-0, who cares? They have nothing more to prove.

ARDIZZONE: They can handle the bad things much more, you know – you lose a set, or the crowd, or a bad call or something – whereas the younger players can let that really affect them. The older players tend to let things kind of roll off them a little better – they just understand it's a marathon, it's not a sprint.

ARDIZZONE: I think the the champions, just maybe they want it a little more. If Serena wants it a little more, and if Roger wants it little more, it's just, you know, some kids are taking their shot at those guys on a one day, Millman can beat Roger on one day, but he's not going to beat him nine out of 10 times. It's a great era, and I hope that's what people really take from it, it's that we're getting something special here. Enjoy it while it's here.