Solar Has A Bright Future — But Something Could Cloud It 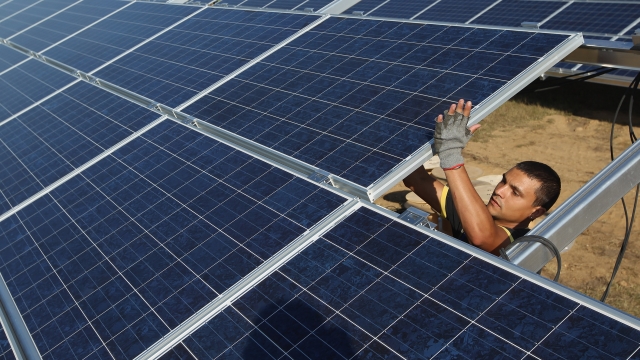 The solar industry now employs more than 260,000 people. That's more than twice the number who work in the coal industry.

The solar power industry in the U.S. is growing fast, and it's creating a lot of new jobs.

The solar industry now employs more than 260,000 people. That's more than twice the number currently working in the coal industry.

That stat comes from a report from The Solar Foundation, a group that describes itself as "a nonprofit, nonpartisan organization dedicated to advancing solar energy use worldwide."

And the group says solar is showing no signs of slowing down. According to the report, for every 50 new U.S. jobs last year, one was in the solar industry.

The World Economic Forum estimates solar and wind are now the same price or cheaper than fossil fuels in more than 30 countries.

This rapid job growth has been linked to more solar panels being installed. The Solar Foundation says lower solar panel costs and higher consumer demand factor in to that.

As the foundation's president and executive director said in a statement, "More than ever, it's clear that solar energy is a low-cost, reliable, super-abundant American energy source that is driving economic growth, strengthening businesses, and making our cities smarter and more resilient."

But the solar industry faces an uncertain future in the U.S.

President Donald Trump has criticized renewable energy in the past. Throughout his presidential campaign, he promised to breathe new life into the coal industry.